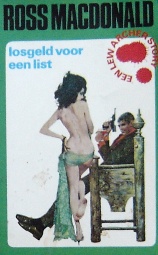 Midnight at the Oasis

Chapter 34 begins with Archer’s two-hour drive to the unfinished Oasis development. Wisely, Macdonald refrains from allowing Archer to ponder the case. Even though we don’t know where the case is going, we know that Mario and Galley are alone in Dalling’s house. Whatever is going on, it’s a volatile situation. Macdonald lets the suspense build.

Archer is suitably cautious when he first arrives. He looks through the window of the house and sees Galley, apparently unconscious with a bloody face. A gun is near her hand. The door is open so he lets himself in.

Galley awakens and raises the gun at Archer. She says she doesn’t know what happened; that she simply passed out for a while. But she refuses Archer’s request for the gun. When he asks where Mario is, she claims not to know.

She admits to killing Keith Dalling, but in a way that makes it self-defense. Archer is openly skeptical of her version.

She is preparing to shoot Archer, on the basis that she can fool the police but not him. Then Mario, who Galley had shot previously, staggers into the room and slowly moves towards her. (The scene is a repeat of the final attack of Hector Land on Mary Thompson at the end of Trouble Follows Me.) She not only shoots Mario again, but she follows up after he is down with three more bullets until the gun is empty.

When Archer takes away the empty gun, she says she is glad she didn’t have to kill Archer and says that he is a witness to how she had to kill Mario in self-defense.

Let’s Stop the Action at the Climactic Moment

Two things have happened in quick succession. Both deserve comment.

First, after she has fired a disabling shot into Mario and re-established control of the situation (because she has three slugs waiting for Archer) she wastes them on Mario.

The number of bullets is a very deliberate choice on Macdonald’s part. He could easily have a single killing shot on Mario be the last bullet, but he set it up so that Galley would throw away everything by wasting those rounds.

The only possible explanation is that Macdonald wants to establish how Galley’s murderous nature overwhelms her ability to count. I am not persuaded.

Galley has been in complete control of herself at every turn, outwitting gangsters, her partners in crime, and even (much of the time) Archer. Whether she enjoys killing or not, Galley did not get this far letting her emotions get the better of her. She has always been shrewdly calculating the odds and her options. Wasting bullets is an implausible departure from her established character traits.

Second, Galley has been beaten unconscious, struggled with a man much stronger than her, overpowered him, faced down Archer, and then defended herself against a second surprise attack. A Victorian woman would have resorted to the fainting couch a long time ago. Then Galley turns to Archer without missing a beat and tells him with a straight face that he is a witness to her act of self-defense. This is a woman of boundless chutzpah. We may have our cavils about all the murders and thefts she’s committed, but we have to admire her sheer nerve and resourcefulness.  Macdonald portrays her as a monster but I think she is one of the more talented and formidable characters he ever created.

Archer has called for the sheriff and tells her to have a seat. It’s a nice move by Macdonald.  There is time to kill while we wait. We don’t need to change scene and we will not be distracted by Archer driving to the police. And being at the scene of some of the crimes gives their conversation an intensity it would not have otherwise.