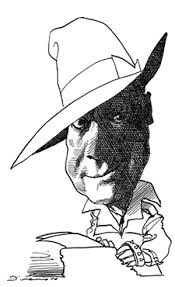 And Now the Rest of the Story

Archer and Galley have a long conversation while they are waiting for the police. It is one of the more interesting denouements in the series. Galley actually admits very little. Every time Archer propounds a theory she either ignores or counters it. She never gives up. The scene only ends with the arrival of the police.

To solve the case, Archer had to ignore some assumptions that seemed fundamental, such as:

Although Tarantine never actually appears in the book, he manages to dominate it from offstage. Everyone, including Archer, assumes that events take place because of Tarantine. The solution only comes once that assumption is set aside.

Archer starts with a tiny clue, the Christmas card Galley sent her mother from San Francisco.  Tarantine lived in Pacific Point. Dalling was in LA. The only person with a San Francisco connection was Herman Speed. That told Archer that Galley was with Speed, not Tarantine, after Speed was discharged. It makes sense; Galley and Speed had plenty of time together, more than she had with Tarantine. Speed was older and richer. Most of all, Speed—and Galley—had a plan to get back at Tarantine for betraying him.

It was an audacious scheme that depended, among other things, on none of the cogs realizing that they were cogs. Dalling and Tarantine each needed to believe that she loved only them.

It was a difficult enough sell with Tarantine, because although they were married they barely knew each other. It was an even harder sell with Dalling. He was already in a relationship with Hammond. Galley not only made short work of her rival, but had Dalling completely besotted in a matter of weeks. Unlike Tarantine, Dalling knew that the woman in his life was a murderer. But Galley kept control anyway.

Despite the complexities, it very nearly worked. It took some bad luck, such as Marjorie Fellows’ decision to follow her husband to the Dalling house, for it to begin to unravel.

The chapter ends with the arrival of the police. Galley has made her last appearance in the book.

After Galley is taken away, Archer and the police search the house and find evidence confirming that Tarantine had been in the deep freeze.

The next day Archer meets with Marjorie Fellows—and her ex-husband George, who has flown out from the Midwest and is anxious to marry her again.

Marjorie informs him that Herman Speed jumped off the Golden Gate Bridge, presumably after running over Mosquito.

Marjorie worries that she may have some responsibility for Speed’s death. In response to her questions, Archer lies and says he never found him.

Archer accepts $100 in payment for his services and they say their good-byes.  The last item of business is Archer’s trip to see Mrs. Lawrence in Santa Monica.