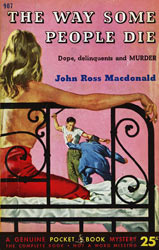 THE ENDING, PART ONE

THE PROBLEM OF GALLEY LAWRENCE

The ending presents the reader with two problems. The first is the problem of understanding Galley Lawrence, which has been noted by many of Macdonald’s critics. The second, what I will call the problem of the $30,000, was noted by Wolfe but not addressed. Both are major stumbling blocks to the full enjoyment of the book and both were avoidable mistakes.

Macdonald has given us a decent amount of background on Galley Lawrence. Everything we are told makes her action less plausible, even if we allow for the fact that her mother is something of an unreliable narrator:

The reader may be pardoned for thinking that there is another Galley Lawrence who killed three men in cold blood for money she didn’t need, but you would be mistaken. The best explanation Macdonald offers is that she hates men. This is not an explanation at all, only an observation. And it may not even be true. Galley kills for money. If a woman had been between Galley and the money, that woman would be as dead as any of the men. The core question of why an educated, attractive, successful young woman goes on a killing spree is never addressed.

Speir gives an odd defense for Macdonald’s omission: “for readers who demand explanations for actions, the clue is there and is fairly obvious. It is in the name Galatea. In an ancient tale told by Ovid, Galatea is the creation of a young Cypriot sculptor. Pygmalion, who hates women. But he devotes his life and genius to the creation of a perfect woman in stone.  He is successful beyond his wildest dreams. He falls in love with his creation and strives to bring her to life, but she remains hopelessly cold and lifeless.”

Speir is correct in pointing out that Macdonald picked the name for a reason, but a literary allusion is one thing and providing a plausible motivation for a character is another. This brings us no closer to a satisfactory answer than Kreyling’s analysis that she is best understood as a Black Widow stereotype—that she does what she does just because it’s her nature.

Wolfe takes a crack at defending Macdonald as well, arguing that the sheer lack of basis for her actions shows the capacity for evil in all of us. I concede the point about human nature. But fiction is not an accounting of the random nature of the world. When we crack the covers of a novel we expect a story with characters who are intelligible with reference to their fictional world. They may make bad, foolish or even evil choices, but there are reasons for those choices. Macdonald has let us down on a key point.

Although Schopen is critical of Macdonald’s failure to explain Galley, he offers a sort of defense: “As Archer cannot satisfactorily explain why Galley Lawrence acts as she does, neither can he neatly classify the other characters as good or evil, for in this world both good and evil arise from the same sources . . . “Fair enough, but the reader does not need characters neatly divided into good and evil.  Such characters make for very dull books. Macdonald in his maturity will create characters with a nuanced mixture of good and evil. The issue is not good and evil, but motivation. Macdonald gives us nothing.

There Was a Way Out and He Didn’t Take it

I find myself frustrated with the Galley character in part because the problem is so unnecessary. It would have been easy to include, early on, some foreshadowing of what was to come.