The Ivory Grin — Part One 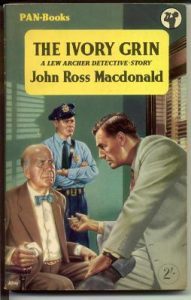 I confess that I am glad we have Macdonald’s early works behind us.  Although I enjoyed reading them, my relentless criticism of their weaknesses was not always fun to either read or write.  Although Macdonald’s middle and later works are not uniformly excellent, each has a claim to strong artistic merit.  My job becomes easier with each book.

“The Ivory Grin is a strong book, progressing beyond previous Archer novels by striving to connect parallel plots of crime on one track, and evil on another.”

The Novels of Ross Macdonald

“The best of the early Archer novels . . . The plotting is ingenious, as one case turns into another, seemingly minor characters become central, suspicion shifts as suspense mounts, and the action swirls around a character who never appears.”

“The Ivory Grin is a work of solid literary detection . . . The first half of the novel ends with the wildest chapter in all of Ross Macdonald . . . The next-to-last chapter confession, neither slick nor mechanical, surprises even Archer . . . The closing image of Archer . . . touches our hearts as no other finale to date.”

Dreamers Who Live Their Dreams

“The Ivory Grin (1952) is remarkable for its foreshadowing of a basic element of The Galton Case . . . and for its treatment of blacks . . . We see in The Ivory Grin the suggestion that such people make a powerful and moving comment on our culture.”

“Macdonald is even now an admirably corrosive teller of tales and one of the few responsible and gifted practitioners in the hardboiled vein. It is possible to accept his creatures, tormented and twisted as they may be, as credible and worth compassion.”

What The Author Thought

Macdonald thought highly of the book, calling it his best yet, “a bigger book than I had written before,” and wrote his own promotional copy:

“[Macdonald’s] characters have a psychological dimension, his stories have social range and moral meaning, and at their highest points an almost tragic passion. Instead of action for action’s sake diluted with cynical sentimentality, here is human compassion for the broken patterns of life.”

“Alfred Knopf said he’d read the manuscript ‘with a great deal of pleasure’ but thought it lacked something crucial: ‘Archer never in the book finds himself in a hot spot . . . Doesn’t the reader expect to be kept every now and then on the edge of his chair wondering how the devil the hero is going to get out of that one.’”

What The Author Thought of the Publisher’s Advice

“I’ll write another good one. It’s either that or have a prefrontal lobotomy so I can write like Mickey Spillane.”

The good reviews did not lead to strong sales.  When the book was reprinted in paperback the title was changed to Marked for Murder without his consent. Later editions reverted to Macdonald’s title.