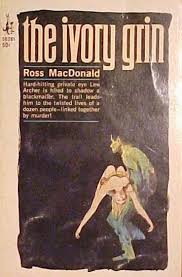 LET’S GET THIS PARTY STARTED

Macdonald had been exposed to Freud by the time he wrote The Three Roads; whether Macdonald’s staging here was deliberate or not, it’s a good narrative move because it tells us what kind of a person the client is.

The client gives her name as Una Larkin. Like everything else she tells him, it’s only partly true.  Her story:

This factual summary hardly does justice to the confrontation in Archer’s office. Archer finds her story suspicious and Una just short of detestable. Macdonald is writing under all the constraints that mainstream publishers imposed in 1952, but it is clear that she is a masculine lesbian.  Macdonald does not take the occasion to show his tolerance for gender diversity.  Quite the opposite:

Creating tension between the detective and the client is a solid narrative device.  Macdonald was weaned on the most fabulously untrustworthy client of all, Bridgette O’Shaughnessy in The Maltese Falcon, and Una will turn out to justify Archer’s suspicions.  I just wish he had focused on her character instead of her gender choices.

Archer drives to Bella City, a dusty agricultural town, and waits where he can observe the lunch counter where Una has told him that Lucy has lunch each day. Seldom in any of the Archer novels is he given an assignment so straightforward. Macdonald is in no hurry; we get a tour of the town and a good deal of commentary on the disadvantaged lives of the minorities and the poor.  We even get some byplay in a drugstore between Archer and the proprietor while we wait for Lucy.

She appears, as Una predicted, and Archer trails her to the house where she is boarding. It’s a poor neighborhood, mostly black.  Thanks to some careful investigative work and the inevitable timely eavesdrop, he sees Lucy Champion being evicted from her rented room by her landlady, Mrs. Norris, who accuses her of being interested in her son Alex. (Lucy is in her early twenties and Alex is at least five years younger.) Norris also accuses Lucy of entertaining a man the previous evening, something that will turn out to be a clue.

Although Alex attempts to intervene with his mother, he is unsuccessful and Lucy packs her bags hurriedly.  Archer follows her while she takes a taxi to the train station.  She heavily powders her face and then takes her bags back out to another cab, which takes her to a sleazy motel.   Macdonald offers us a memorable description of the motel owner:

“His forearms were marked with blue tattoings like the printing on sides of beef. One on the right arm said: I Love You Ethel. His small eyes said; I love nobody.”

Archer checks into the room next door.  The scene is set.

A Side Note on Race

Readers can be forgiven for not noticing the significance of Lucy powdering her face before she goes to rent a motel room.  She is light-skinned, light enough to pass for white, which is one of Mrs. Norris’ many grievances.  It is 1952, and even the disreputable motel is off limits to people of color.

I have a larger point.  The book has several black characters, and several examples of police oppression and abuse of black suspects.  But it is not fundamentally about race.  The story could have been written with an all-white cast.  This is not a criticism; it speaks well of him that he went out of his way to draw attention to the problem of racism.  But race is not essential to the plot the way it is in Trouble Follows Me.