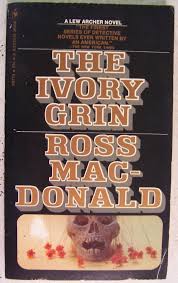 MEANWHILE BACK AT THE MOUNTVIEW MOTEL AND TRAILER COURT

Archer checks into the room adjoining Lucy’s and makes a call to Una at the Mission Hotel in downtown Bella City.  A few minutes later she appears at Lucy’s door and pushes her way inside.  Archer presses his ear to the thin wall.

It’s Time for Another Eavesdropping

Not all of what Archer hears makes sense at the time but all of it is important:

The Investigation Continues, with some Memorable Language

At one point he is close enough that he turns away to let her walk past. “Bent over a bin of oranges with my back to the street, I heard her heels on the pavement and felt her shadow brush past me, like a cold feather.”

Archer follows her to a dilapidated house being used as the medical office of Samuel Benning.  Lucy is not in the waiting room, but a dark-haired woman appears:

“She wore the gray striped uniform of a nurse’s aide, and she was handsome in a plump and violent way. Her black eyes looked at me as if they knew it.”

The woman is Dr. Bennett’s wife and she will be a person of consequence in the story.

Archer can hear Lucy’s voice in an adjoining room but can’t catch any words.  Then Dr. Benning, a pale, wrinkled balding man, comes into the reception area and tells his wife that he needs help from her.

Archer leaves the medical office and waits outside.  He follows Lucy back to the train station and watches as she buys a ticket.

At the station, Archer is accosted by a disgraced former private detective who has been following Lucy. Macdonald holds back nothing in painting a portrait of a detestable PI, including his obnoxious affectation of inserting bad French into his dialogue.  It’s an unnecessary effort because the contrast with Archer’s integrity is so clear.

For all his many faults, Heiss serves as a mainspring to move the story along at several points.

As they are talking, Archer sees Lucy leave the station and get into a car with Alex Norris, the son of her landlady, at the wheel.  Archer shakes off Heiss and attempts to follow, but he loses them.  He stops to eat and then walks back to the motel.

Archer sees that Lucy’s room key is in the door.  When she doesn’t answer he slips inside and finds her body, her throat cut. In her hand is a bloody knife of a bolo design that belongs to Alex Norris.

In the world of Ross Macdonald, suitcases are seldom used for their intended purpose.  Mostly they exist to provide clues. Lucy’s are no exception: