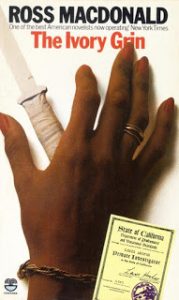 Archer leaves Lucy’s motel room and has a physical confrontation with Alex Norris, her teenaged boyfriend.  Norris wants to know what Archer was doing in her room. Norris says he had dropped her off at five, about half an hour ago. Alex says that he drove around for half an hour after dropping her off to get her suitcases. Norris was coming back to get her and that the two of them were going to take the train.  Archer allows him to see the body. Archer suspects that she did not want him at the motel because she was passing as white, and Alex confirms this.

Archer notifies the police, who arrive and promptly decide that Alex is the murderer, partly due to his lack of alibi but mainly because of his race.

A Subplot That Does Triple Duty

The police attempts to pin Lucy’s murder on Alex Norris take up a good deal of the story, and the core plot could have moved along without it.  But it serves three functions that justify the effort.

Archer takes a moment to question the motel owner, who says he last saw Lucy at five when she came in and asked for a duplicate key, which he gave her.  She said hers was missing.  The missing first key is going to turn out to be an important clue.

When Alex Norris attempts to escape, the officer charged with guarding him raises his gun. Archer deliberately steps into his line of fire, allowing Alex to jump out a window and flee in his car.

You Are Going to Hear This a Lot

Macdonald’s description of the gunplay:

“His black police-holster snapped open and a revolver popped up in his hand like a lethal jack-in-the box. Its safety clicked off.”

Revolvers do not have safety catches.

I am better at willingly suspending my disbelief than most people, but Macdonald’s lack of familiarity with firearms disturbs me.  In several of his earlier books he gets things wrong, like the .32 caliber target pistols in The Moving Target, but such weapons are merely implausible, not flatly impossible.

As a crime writer, Macdonald was a diligent professional. He regularly attended criminal cases and apparently even arranged to witness autopsies.  But he makes a number of dumb, easily correctable mistakes about guns.  They are never important but they are jarring.

The police question Archer. He needs to explain how he came to find the body but he wants to protect his client even if he doesn’t like her.  He explains that he is a private detective and gives Una’s name but omits that he saw her visit Lucy in her room that afternoon.

Some Good Detective Work Despite His Client

Archer goes to the Mission Hotel and the desk clerk directs him to Una’s room.  Their conversation degenerates into mutual insults.  He asks her where she was at five and she says she made a long-distance telephone call. When he informs Una that Lucy is dead, she denies any responsibility.  When Archer says he is going to make a statement that includes her visit to the motel, she becomes angry. Archer takes out the hundred-dollar bill, throws it at her feet, and stomps out.

Archer goes downstairs to the desk clerk, posing as Una’s financial advisor and goes over the room charges.  He confirms that she made the five o’clock call, person to person, to a man named Garbold to a town just outside Detroit.

When Archer returns to Una’s room, she has fled down the fire escape and disappeared.

Archer tries Dr. Benning’s number but there is no answer.  As Archer describes the situation, “I had no client, no good leads, not much money. Regret for Una’s hundred dollar bill was gnawing at me already, like a small hungry stomach ulcer.”

But his luck improves. On the street he happens to see the receptionist from Dr. Benning’s office. “The back of my neck began to itch where the bitch goddess coincidence had bitten me before.”

He follows her into the same restaurant where he’d seen Lucy at lunch.  The woman is sitting with Heiss, the crooked private eye, and he is clumsily attempting to ingratiate himself with her. Then Mrs. Benning appears and tells the woman (whose name is Florie) that she did not finish her work and needs to get back to the office. Mrs. Benning warns Heiss to stay away. Mrs. Benning is clearly more worried about Florie talking to Heiss than she is about any unfinished work back at the office.

Archer decides that it is time he took more of an interest in Dr. Benning’s office.