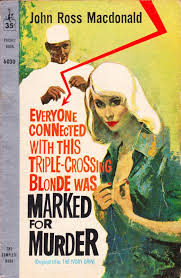 Say Hello to Mrs. Benning. And her Gun, Too

Archer breaks into Dr. Benning’s clinic, which is closed for the night, searching for information about Lucy Champion. Using a flashlight he explores the office, finding nothing but the usual medical equipment and a human skeleton.  He checks the patient files and finds no card for Lucy. Before he can search further he is interrupted by Mrs. Benning, who is carrying an automatic. Her speech is punctuated by the kind of slang we do not associate with doctor’s wives. She denies knowing Lucy but is upset when told she is dead. When Archer confronts her about her reaction she says Lucy was a patient but cannot explain why there are no records.

Welcome to Arroyo Beach, the First Decent Clue and a New Client

Like Bella City, Arroyo Beach is a community we will not visit again after this book.  It’s the wealthy part of town. Archer is here because Lucy’s newspaper clipping identified Mrs. Charles Singleton of Arroyo Beach and her missing son Charles.

Mrs. Singleton is remote, wealthy, and suspicious of Archer. It turns out that she has reason to be suspicious of private detectives, having dealt with Heiss already.  When Archer offers to find Charles, she refuses his offer. Although her manner is cold and aloof, her decision is understandable.  Aside from the fact that Lucy was carrying the clipping, there is no apparent connection to the disappearance.

Archer’s departure is interrupted by Sylvia Treen, a young woman employed as a companion to Mrs. Singleton.  She is in love with the missing Charles.  Although she knows that he is not interested in her, she cares about his safety anyway.

Sylvia tells him that Lucy came to the house recently but changed her mind before entering the house and ran off instead.  But she left an expensive turban behind (fashionable women wore turbans at the time, when they weren’t wearing hats—remember that it’s 1952.) Sylvia gives it to Archer. More important, she hires him to find Charles.

We Need to Talk About Charles

Sylvia is so clear-eyed she verges on cynicism; which is remarkable considering she is presented as young and lovestruck.  Charles feels guilty that he will inherit money he never worked for.  He wants to suffer and he would choose a woman who would make him suffer. He is attracted to the life of the working class because he feels he does not deserve his good fortune.  She is certain that he has found such a woman, because he has never been at home long enough to get him to fall in love with her.  He spends most of his time in a mountain cabin, and apparently not alone.

Archer goes to the hotel where Singleton was last seen two weeks ago. He learns from the parking lot attendant that Singleton left with a gorgeous blonde.  She had been dropped off by a woman who might have been Lucy.  And then, a few minutes later, Una pulled up and asked about them.

We Need to Talk About Hats as Well

The turban has the label of the local shop where it was made, and Archer interviews the shop owner.  It’s a complicated interview. At one point she leaves the room to make a phone call and declines to say who she’d called. Eventually Archer wrings out of her that the hat was bought by Una (whose real last name is Durano) for a beautiful young blonde woman.

Peeking Through a Window at the Right Time

Almost every Ross Macdonald book has either an overheard conversation or a peek through a window; The Ivory Grin gives us both.

Archer goes to the Durano house, a large, isolated property in poor repair.  He sees a man at an upstairs barred window trying to break out.  He goes to a ground floor window where, in the words of Peter Wolf, we are treated to “the wildest chapter in all of Ross Macdonald.”

Una and a muscular large man are downstairs; we gather that he is an attendant. They bring down the man that Archer saw at the window.  The man has been howling and they hope that he will calm down.  The man mutters wildly and then pulls out a gun and shoots the attendant and Una, who fall to the ground.  And then they get up again.  The gun is a cap pistol. The attendant takes him away and Una starts playing cards.