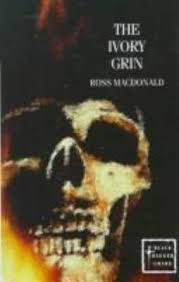 Archer’s next stop, the next morning, is the remote cabin/studio of Horace Wilding, whose address was given to him by Sylvia. Wilding is the spiritual cousin of Claude, the sun-worshipper from The Moving Target, and he speaks in the same almost-wise word salad that Macdonald no doubt suffered through from some real-life Californians.

Wilding takes Archer to Singleton’s cabin but they find it sealed with an official notice which, as Archer points out, is rather odd, since the sheriff has already been quoted as not suspecting foul play.  Archer peeks through the window anyway but there is nothing to been seen, at least from that vantage point.

Wilding knows the blonde woman well; her name is Bess and she has been with Singleton for seven or eight years, even before Charles went off to the war.  Apparently she was already married to someone else. Wilding did not see her after the war for several years; Charles had gone to Boston to attend law school.  But Wilding allows that she might have followed him there.  The two of them had been using the cabin regularly all this year.

As far as the last night Singleton was seen alive, Wilding remembers hearing a single shot about eleven in the evening.

Wilding describes Bess as being almost unbelievably beautiful, so much so that he doubted he could paint her even if Singleton would have allowed it, which he did not. But “She was perfect until she opened her mouth . . . she had learned to speak English in . . . a rather barbarous milleu.” When pressed, he draws Archer a sketch from memory.

Although she has changed the color of her hair, when he sees the sketch Archer recognizes her immediately as the wife of Dr. Benning.

Archer goes to Dr. Benning’s house; the doctor remembers him from his brief visit there when he was trailing Lucy Champion. Benning tells Archer that Lucy had briefly been a patient but that he did not know her well.  He says that his wife is upstairs and is not well.

Archer and Benning go to city hall so Benning can give a statement.  Some unexpected things happen.

To the Mountains and Back Again

The police have received a call of a body in a burnt-out car in the canyon near the Singleton cabin and offer Archer a ride.  It is Singleton’s car (which has not been seen since the night he disappeared) and the burned body is wearing his belt buckle.

Archer pays a call on Mrs. Benning, who says she has been married to Dr. Benning for the last eight years and denies knowing Singleton.  She admits coming from a bad background, as if that were not obvious enough from her rough speech. She admits to marrying Benning to escape a bad home situation.

When Archer asks why she left Benning two years ago she is evasive, and then offers herself to Archer. When they are close he confirms that her black hair has blonde roots. Archer presses her but she refuses to tell him anything more. Under the pressure of Archer’s questions, she faints and Archer catches her.

Dr. Benning arrives at that moment, apoplectic at the scene.  The two spouses verbally abuse each other. Archer questions Benning about his wife’s whereabouts at the time of the deaths of Lucy and of the man in the burned car.  He swears that she was home both times.