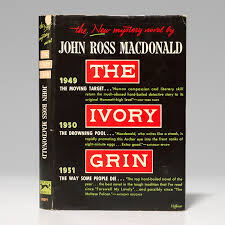 I Talk, You Listen

Archer’s next move is not to go to San Francisco, as we might expect, but to visit Una Durano.  Mrs. Benning is the key, as Archer has observed to the police, but without a lead the best he can do is to visit his former not-so-beloved client.

It is a peculiar interview, because Archer spends a great deal of it telling Una what he already knows.  But since Archer does not explain his mental processes to the reader, we need to have them explained in dialogue.

His next stop is Arroyo Beach where he meets with Sylva Treen.  He tells her that although the body in Singleton’s car is not him, Singleton is probably dead.  He also tells her that Bess Benning, Singleton’s girlfriend, was involved in covering up the shooting and probably took Singleton to her husband for treatment.

Sylvia has some news of her own.  Bess Benning just called; although she didn’t identify herself, Sylvia is certain it was her.  Benning wanted five thousand dollars to provide information on Singleton’s whereabouts. She said she would phone again later that evening to arrange a meeting place.  Mrs. Singleton has the money on hand; she has had it in readiness ever since she first posted the reward.

This Clue So Dates the Story

If you are under forty this conversation may not make sense

“The operator asked her to deposit more money, and she hung up.” [Sylvia said.]

“It was a long distance call?”

“I had the impression it came from Los Angeles.”

“How much did the operator ask for?”

Archer says that since Bess knows his voice, he can’t take the call.  Sylvia should arrange the meeting place in front of Archer’s office in Los Angeles for ten that evening.  Besides his general desire to control the situation, Archer has recording equipment set up in his office.  He tells Sylvia that he wants her to come along. (This is the most minor of cavils, but I’m not sure that bringing Sylvia along makes sense, but it does allow them to have a conversation in Archer’s office while they wait.)

Shortly after, Bess calls back. The game is on.