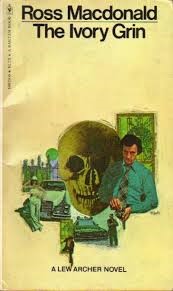 Chapter Twenty-Nine opens in Archer’s office in West Hollywood, shortly before ten in the evening.  Archer and Sylvia look out the window and wait.  It’s a shame that Macdonald seldom wrote static scenes because he was very good at it.  After more than two hundred pages of action, a few pages where nothing happens is very effective.  It lets us catch our breath and it leaves us in suspense for what we know will be an important conversation.

The phone rings and Archer answers, but no one is there.  Archer cannot know this, but the caller is Una and she has just verified Archer’s whereabouts.

Just before ten, Archer bundles Sylvia into a small side room so she can observe and take notes.

At the appointed time Bess Benning pulls up. Archer meets her at the curb and tells her to come inside, assuring her that the five thousand dollars is waiting.  As Archer frisks her, Macdonald gives us another of the descriptions that gave rise to the charge of misogyny.

“. . . I saw that she was losing what she had. Her past was coming out on her face like latent handwriting. Her powder and lipstick, alkali and orange in the fluorescent light, were cracking and peeling off.  Grime showed in the pores of her nose and at the sides of her neck.  Dissolution was working in her rapidly like a fatal disease she had caught from her husband that day.”

Once Bess is in Archer’s office and has seen the money for herself, the story comes out.

It’s a Lot to Take In

The story doesn’t allow Bess much time to reflect on the sad story of her life, but she makes an important observation.

“I’ll tell you what’s really strange . . . The people you love are never the ones that love you. The people that love you, the way Sam [Benning] loved me, they’re the ones you can’t love. Sam was a good man when I first knew him.  But he was too crazy about me.  I couldn’t love him, ever, and he was too smart to fool.  It ruined him.”