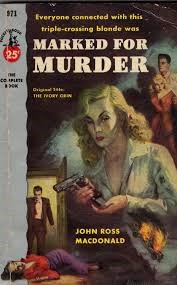 To Live and Die in LA

Archer asks Bess whether she was involved in the killing of Heiss, but before she can answer, Sylvia faints in her hiding place and the noise interrupts their conversation.  When Archer goes to check on her, Bess takes the opportunity to pick up the money and head for the door. Archer tells her to wait, that they are not finished.  She ignores him.

When Bess opens the door, Una is waiting in the hallway and shoots her dead. (Una was afraid Bess would confess everything to Archer and her fears were confirmed when Archer answered his phone in the office at nearly ten in the evening.)

Archer shoots Una, killing her with a single shot.

Bella City is No Prize, Either

Benning placed Singleton’s skeleton in the furnace but Archer interrupts him before the heat can destroy the bones.

Dr. Benning says that Bess had told him that she had shot Singleton, to motivate him to try to save the man and avoid a murder charge for her. Archer tells him the truth.

Benning is a smart man and tells several lies and evasions.  He initially says that Singleton’s death was an accident but when Archer suggests that it would have been easy for him to let the scalpel slip in Singleton’s bowels, he observes, “My enemy was delivered into my hands.”

Benning asks for an opportunity to commit suicide but Archer takes him to the police instead. The last line:

“He started down the veranda steps, his short black shadow dragging and jerking at his heels.”

We Add Yet More Distorted Relationships to the Canon

In the world of Ross Macdonald, personal relationships, especially marriages, are often not what they seem.

We may be done with The Ivory Grin, but we are not anywhere near done with the variety of coercive relationships Macdonald has to offer.