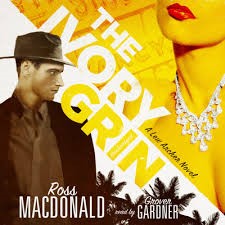 One of the pleasures of reading a mystery series is tracing material from one source to another.  Macdonald lived in a world where regular and frequent publication was essential to his financial survival. His method of writing out his manuscripts longhand was a drag on his productivity and he took various shortcuts to maintain the necessary pace.

He Borrowed the Plot

The core of the story is taken from his own short story, “Strangers in Town,” written in in 1950 but withheld for publication when he decided to expand it into a book.  The story is a classic pulp thriller, with plenty of violence and a Thompson submachine gun, but the roots of The Ivory Grin are clearly visible.  For those of you interested in the creative process, the story is included in The Archer Files, edited by Tom Nolan, which also include as a bonus a nice biography of Lew Archer.

Californians Love to Talk about the Real Estate Market

In Chapter Eleven, when Archer is seeking to see Mrs. Singleton, he pretends to be interested in real estate and is drawn into a conversation with an unnamed service station attendant about how the attendant could have become rich in real estate if his wife had only allowed him to invest at the right time.  A nearly identical complaint is voiced by the motel owner in Chapter Two of The Drowning Pool.

Charles Singleton, Jr. is the Model for Anthony Galton

It will be seven more years before Macdonald writes The Galton Case, but the two young men are similar in every respect. Both come from wealthy backgrounds, both have domineering mothers, both resent their wealth and correctly understand that it is being used to control them. Both rebel in various ways, including taking up with working-class women.  Both are naïve enough to idolize the life of the working man and both seek to enter that life.  One is more interested in politics and the other more in art, but except for that, the two are hardly distinguishable.  Although The Galton Case is more of a missing persons case about Galton than The Ivory Grin is about Singleton, the identical mystery is presented in both books—as well as very similar solutions.

Macdonald was to write four more novels and a book of short stories before he revisited the character of Singleton, realized the dramatic potential of the situation, and wrote the book that would make him famous.

He Recycled Some Forensics

Lucy Champion’s body is found in a motel room where she is hiding out, shortly after an argument with one of the people she was running away from.  Her throat has been slit from ear to ear.  Macdonald goes out of his way to have the coroner observe that he has never seen a suicide by cutting the throat that did not display hesitation marks.  It’s a rather irrelevant observation, given the circumstances, but it allows Macdonald to display something he had learned when writing Trouble Follows Me.

We Have Yet Another Misplaced Woman

Love will always be a difficult thing in the world of Ross Macdonald.

Starting with the first Archer novel, pretty much every book includes a woman bearing an unrequited love.