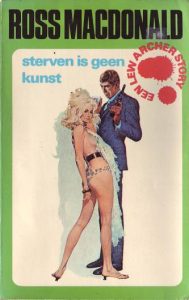 An Advance over His Previous Book

The Way Some People Die was cleverly plotted, with vivid characters and unexpected turns, but it is marred by the problem that we never understand how Galley Lawrence could have turned out as she did.

In The Ivory Grin, the closest comparison to Galley Lawrence is Una Durano, but Macdonald is not interested in presenting Una as a fully-realized character.  Una does bad things because she is a mobster and mobsters do bad things. But Macdonald is careful to present the full, unfortunate circumstances of Bess Benning to explain her role in the sorry tale.  Bess has not one but two long confessional passages, one in chapter Twenty-Two and another in chapter Twenty-Nine.  Macdonald no doubt knew girls like Bess from his youth in Canada and his sympathy is clear. Speaking of her life after her arrest at sixteen for juvenile delinquency, she says:

“The sourpuss judge set it up so I couldn’t work in the clubs any more.  That wasn’t the worst of it. I had to go home and live with the family . . . The social workers were snooping on me, making me stay in nights where the old man could get at me. Sam saved my life.”

I like how the death of Singleton is left ambiguous.  Macdonald wisely resisted the temptation for a bald confession.  A little uncertainty makes the story linger in the mind.

The book foreshadows many of the themes of Macdonald’s mature work—how parents often do more harm than good to their children, the figure of the rich son wanting to escape his life by disappearing into the lower classes, and the helpless frustration of unrequited love.

It Has its Flaws

The surprise that Una is behind it all comes at a cost.  We never get a chance to understand why she used Leo to murder Singleton.  The event that triggers everything else, or at least the timing of the event, is unexplained.

The character of Singleton is left as something of a mystery.  This is another price to be paid for the circumstances of the plot.

Some readers may be annoyed by how the book shifts focus.  The first half is about Lucy Champion; in the second half the book is about everyone else.  Personally, I see this as the organic shift of the story from a bit player to the core actors.

The character of Sylvia Treen seems to have been grafted onto the story.  We do not meet her until halfway through the book, and except for one short scene where she facilitates Archer’s work, we do not see her again, when she plays a small role in Bess’ confession.  Aside from her decision to hire Archer, she displays no agency.  Mostly she is a cog dropped into the machinery to make it turn.

That being said, within her limited role her character works well.  She is the counterpoint to Bess, revealing just how much of a mess Singleton is.  He cannot make any of the three women in his life—his mother, Bess or Sylvia—happy.  He feels he has failed to live up to his mother’s expectations.  Sylvia isn’t carnal enough for him and Bess offers nothing else.

The Ivory Grin is an underappreciated classic and stands up well against his mature work.

Next is the next to the last non-Archer book, Meet Me at the Morgue.