MEET ME AT THE MOURGE Part One 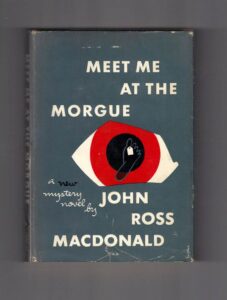 After four Archer books, Macdonald introduces a non-series detective, Howard Cross, a probation officer. Aside from Wolfe’s lengthy plot summary, the critical focus is on what it means to what is essentially the Lew Archer series that Macdonald is taking a vacation from his creation. Very little is said about the merits of the book itself.

I am going to depart from the format of my usual opening post when I start a new book.  Peter Wolfe, in Dreamers Who Live Their Dreams, discusses the literary structure of the book at some length; Kreyling and Schopen each make their own contributions, but everyone’s focus is on the absence of Lew Archer.

Your Relationship Status With Your Detective: “It’s Complicated”

The first decision for series writers, when they contemplate the next book, is whether to continue the series or try a stand-alone. There are plenty of reasons to keep the series going:

And there are reasons to step away, at least for a while:

It’s Personal to the Writer

“The kind of crazy you get from too much choice.”

I write in the most restrictive format possible:

A famous author—it may have been Chandler but I can’t find the attribution right now—said that the private detective form was strict as a sonnet. He was talking about mysteries generally but his remark applies with even more force to the series detective. Personally, I am happy to work within those limitations. It may be my legal training or my lack of imagination, but I find that it makes the work easier, not harder, because the reader approaches my story with a clear expectation of the conventions of the genre.

For me, the challenge is to work within these limitations and avoid repeating myself.  I try hard to approach each book after The January Corpse in a radically different way:

Back to Macdonald and then on to the Book

Without making any spoilers, what does Macdonald do with the artistic freedom he achieves without Lew Archer?  Not a lot.  His detective, Howard Cross, speaks and acts much like Lew Archer.  The plot includes the possibility of a romance, something that will not happen to Lew Archer for another thirty years. With minimal change, this book could easily have been written as part of the series.

But let’s not fall into the trap of just talking about the negative space created by the absence of Lew Archer. The book has some flaws, mostly involving the inclusion of unnecessary material, but at its core it’s a strong mystery with a surprising twist.