MEET ME AT THE MORGUE Part Two 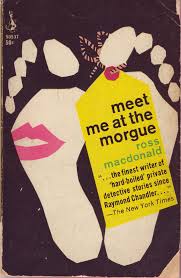 The Opening Line is, “I met the boy on the morning of the kidnapping.”

Nobody can stop reading at that point

The narrator, Howard Cross, a probation officer, arrives at work and encounters a Navy veteran named Fred Miner, who is on probation for vehicular homicide. Miner is driving a car owned by his employer, Abel Johnson. The four-year-old son of Johnson, Jamie, is in the car.  Miner clearly dotes on the little boy.  When Cross asks Miner his business he is evasive and says he had hoped to talk to the probation officer who is supervising his case.  Even though that person is on vacation for a week, Miner declines to discuss his concerns with Cross.  Miner tells Cross that his employer told him to take Jamie for a ride. Since Miner is allowed to drive under the terms of his probation for work reasons, Cross has no basis to stop him.  Miner and the boy drive away.

Within a few pages we learn the background through a conversation Cross has with his assistant probation officer, Ann Devon.  She will turn out to be another of Macdonald’s forlorn young women, but for the moment their conversation gives us important information:

Anyone who is not suspicious that there may be more than meets the eye should probably give up reading mysteries. It will turn out that this death is just as important as we suspect.

Cross and his assistant settle down to their daily routine for several hours, till about eleven, when Mrs. Amy Miner appears and tells them that her husband and the child have disappeared and that a ransom demand has been received.

Macdonald’s opening is not as full of poetic description as The Moving Target, and for a good reason.  We are not being eased into a static scene; we are dropped into the middle of the action.  Actually, because of the two-hour lapse Macdonald has engineered, we are a few beats behind the measure. As we will learn shortly, the ransom demand is already in the process of being paid when Cross first learns about it.

I Feel Someone Walking on my Grave

For anyone with a close knowledge of what happened in Macdonald’s life in early 1956, his inclusion of a fatal pedestrian accident with a drunk driver in his 1953 book is unsettling. In 1956, his teenaged daughter Linda became very drunk and ran over and killed a pedestrian (as well as injuring several others.)

A Side Note on Naming Characters

There are writers (like me) who are so lazy that when they need the name of a character they grab names of acquaintances out of the air, with the main criteria being how easy it is to type. Macdonald had a deep background in both the classics and in English literature.  He gave a lot of thought to naming throughout his career. I will not often bother to mention it, but he has some particularly good ones here:

Now let’s get the story moving