MEET ME AT THE MORGUE Part Three

Late to the Party 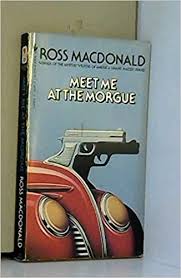 Chapter Two opens with the appearance at the courthouse of Amy Miner, Fred’s wife. She is highly upset but Cross manages to get out of her that a ransom demand of fifty thousand dollars has been made, payable at eleven o’clock.  Because Cross and his assistant have been doing their normal work since the courthouse opened, it’s nearly eleven already. The ransom letter contained the usual mandatory warning not to go to the police. (Someday I would like to see a ransom note that included the number of the local FBI field office, just for the sake of novelty.)

Fred Miner works for the Johnsons. He and Amy live in a guest house on the property. Cross has no official role in the matter, but he offers to take Amy back home since she has no car of her own. This is a nice narrative move; it puts the probation officer’s toe in the pool without an implausible commitment that he will become the unauthorized primary investigator of a felony in progress.

Meet Me at the Morgue often employs very short chapters, especially at the beginning.  Together, chapters three and four give us the following information:

“[Helen Johnson] went to the window and stood with her back to me, looking out. Against the expanse of space, her figure seemed tiny and forlorn. It was a big country, and a four-year-old boy was a very small object to look for.”

Chapter Five is a pause in the action.  Having set up the problem, Macdonald needs to the put investigation on hold while he drags in a couple of characters he needs for a romantic subplot.  Whether that subplot adds anything to the force of the story is for you to decide.

The first is the marvelously named Lawrence Steifel, an immature and boastful young lawyer with a fondness for the bottle.  Steifel is the Johnson family lawyer whom Abel hired to defend Fred from the homicide by vehicle charge back in February.

Today, Abel Johnson called Steifel when he received the ransom demand.  Steifel was not present when Johnson dropped off the money, but he followed Johnson’s train to its first stop on the way to San Diego and picked up Johnson there.

The second is Ann Devon, the book’s Forlorn Girl. She is in her very early twenties.  She has so little to contribute to the discussion in chapters three and four that it is a little surprising when she speaks at all.  She was supposed to have a dinner date with Steifel the night before and upbraids him for cancelling on her so he could have dinner with Mr. and Mrs. Johnson.  It seems like an odd conversation in the context of the danger to the life of a little boy, but if Macdonald is serious about his romantic subplot, it’s as good a place as any to jam it in.

Chapter Five helps move along the plot in some ways. Cross and Helen Johnson speak at some length, and Cross is impressed that Helen still seems willing to withhold judgment about Miner despite his evident role in the matter. Whether Cross’ decision is based on concern for Helen or Miner, or both, he volunteers to go to the train station and see what he can learn.  She tells him to act as he thinks best.  The closing lines:

“Going back around the curved side of the pool, I kept away from the water’s edge. I had a strange fear of falling in, though I had never been afraid of water.”