MEET ME AT THE MORGUE Part Four

An Encounter with Tiresias 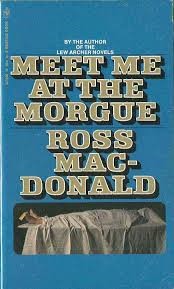 Following the instructions in the ransom note, Cross goes to the drop off point at the train station next to the newsstand. A lesser writer would have obtained a lead from the newsstand operator and moved on. It is a measure of Macdonald’s confidence in his own talent that his newsstand operator is blind.  And that he can help Cross anyway. The cherry on the sundae is that Macdonald named him Joe Trentino, a riff on the blind Greek seer Tiresias.

Cross follows Trentino’s suggestions and soon finds the man who picked up the suitcase with the fifty thousand.  Of course, the mystery cannot end after only seven chapters. The man is dead, an icepick in his neck, and the suitcase is empty.

We Finally Meet at the Morgue

In Chapter Eight, the corpse is viewed by Amy Miner and Helen Johnson but neither of them recognize him.  The only clue to his identity is a case for his comb with the initials A.G.L. The car was registered to a Kerry Smith in Los Angeles. As the detective on the case observes, we now have two unidentified corpses linked in some way to Fred Miner. Suspicious of Any Miner’s denial of knowing anything, the detective decides to hold Amy as a material witness.  This gives Cross, who is skeptical that either she or Fred is involved, additional motivation to take an active role in the investigation.

Chapter Nine is devoted almost entirely to the romantic subplot between Ann Devon and Steifel.  She confesses that she is in love with him but that he is under the thumb of his mother who–wait for it–stifles him.

Chapter Ten is, essentially, Cross’s reading of Miner’s presentence investigation from the vehicle homicide in February.  The lack of dramatic action is more than balanced by the importance of the background information.  Up to now, the reader has only had oblique references to the person at the heart of the disappearance. We learn that Fred Miner has a weakness for alcohol and hardly ever drinks.  He was seriously wounded in a kamikaze attack on his ship, an escort carrier named Eureka Bay, at Okinawa, and spent a year in a Stateside hospital recovering.

Macdonald served as communications officer on an escort carrier named Shipley Bay and saw action against the kamikazes when his ship was attacked. As a writer, he uses his war experiences half a dozen times, as detailed here in a post uploaded February 16, 2021.  Miner’s wartime service and its aftermath are important in how the plot unfolds.

Chapter Eleven is the beginning of the next phase of Cross’s investigation.  As soon as Cross finishes reviewing the presentence report, the hapless lawyer Steifel shows up. Macdonald proved himself unable to write convincing patter between educated people in The Dark Tunnel and he has learned nothing since. Out of respect for his memory we will pass over it.  But we do learn a few important things:

Chapter Twelve introduces us to Steifel’s mother, who is every bit as manipulating and passive aggressive as you can imagine. For a repellant character, she is well-drawn. So much so you want to skip to the end of the chapter to get rid of her. But it’s important to hang in, because in this chapter Steifel gives the business card of the dead man to Cross—although it doesn’t bear his name, it has the contact information for his employer, a detective agency on Sunset Boulevard. in Los Angeles.

If you think that the title of the book is a little pedestrian for an author of Macdonald’s talents you would be correct.  His original title was Message from Hell, which his hardcover publisher refused. The paperback publisher suggested The Convenient Corpse, which Macdonald rightly rejected. There are no convenient corpses in the book. In defense of Macdonald’s choice, at least the text contains a reference to a message from hell.  Cosmopolitan brought out an abridged serialized version called Encounter with Evil, but nobody seemed to like that title, either. Eventually, the final artistic decision was reached by committee and was as unsatisfactory as such decisions usually are.