MEET ME AT THE MORGUE Part Five

Running Down the Clues 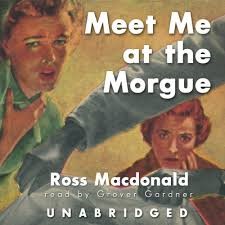 Using the card from the detective agency as well as a label from the dead man’s clothes, Cross moves the investigation along. Although he has no investigative training, he could give Archer a run for his money:

Cross next tried to locate Molly Fawn.  She has vacated her apartment but her former landlady is happy to spread gossip as well as fact:

Cross is on a roll.

His next stop is a luxurious home that was the source of the suit that Lemp was wearing when he was killed.

And He’s Not Done Yet

Cross goes to the studio and finds Molly Fawn there, living in a room in the rear.

Molly Fawn is persuaded to take Cross to the low rent hotel where Lemp was staying the last time she heard from him. Lemp, of course, is in the morgue, but a search of his luggage leads to documents linking Lemp to the kidnapping.  In a Ross Macdonald novel, every suitcase has critical information. Even without Archer, the rule holds.

He Has to Stop For Coffee Sometime

In Chapter Twenty, Cross takes Molly Fawn back to the Pacific Point courthouse and leaves her with the police for questioning.  He confronts Amy Miner, Fred’s wife, who is being held as a material witness.  She is deeply upset but Cross establishes some important facts—not so much about the kidnapping as the reasons behind it.

Shortly afterwards, when Cross is talking to the detectives on the kidnapping, we learn that the person who turned in Snow years before was Lawrence Steifel when Steifel was doing courts martial work for the Navy.

And just to make it more interesting, we learn that Abel Johnson just died at his home of a heart attack brought on by stress.