MEET ME AT THE MORGUE Part Six

Closing in on the Kidnappers at Last 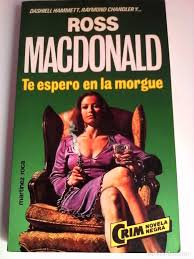 Cross rushes to the Johnson home; our favorite lawyer, Larry Steifel is there, drunk and making moves on the new widow.  Steifel makes himself annoying to everyone in the house except Abel Johnson, who is already dead.  Apparently Johnson locked himself in his bedroom and worked himself into a rage, possibly deliberately, until his heart gave out. (And lest you get caught up in any false clues, the death of Mr. Johnson is indeed an accident.)

Cross tells Helen that her late husband had hired Lemp to follow her, which does nothing to endear his memory to her.  She denies she was ever unfaithful. (And another no-red-herring warning: there is nothing to suggest she was.) And she realizes that it was her husband who brought Abel into their lives in the first place.

Steifel tells Cross that it was Helen Johnson who gave him Kerry Snow’s whereabouts years ago and urged him to turn the man in.

Cross decides that he should check a desert house owned by the Johnsons.  Asking her to come makes sense since the cabin is hard to find.  Unaccountably, Cross asks the drunken and generally useless Steifel to accompany them.

When they get to the cabin, Fred Miner and the boy are there. Steifel wounds Miner as Miner drives away.  Cross goes off in pursuit.  Miner wrecks his car and dies in Cross’s arms, saying that Mrs. Johnson told him to take the boy out there

The Boy is Safe and the Kidnapper is Dead:

How Can the Book be Only Two-Thirds Done?

Because you are in the world of Ross Macdonald, where the crimes in the present day cannot be understood until the past is unraveled—in this case how Kerry Snow came to be sent to prison years ago. It is only now when the important investigation begins.

The police speculate that Fred Miner and Kerry Snow were shipmates together, and that both of them were engaged in illegal activities aboard ship. Snow was caught and Miner was not. Miner wanted to see Snow go away so he told his ward nurse, Helen, where Snow could be found but asked her to keep his name out of it. She passed along the tip to Steifel.  When Snow get out of prison he went looking for Miner, but Miner saw him first.  Which makes the February accident murder. It’s plausible but it doesn’t explain either how Lemp got involved, why he was killed, or who killed him.

Cross has been developing feelings for Helen Johnson through the ordeal, and they seem to be reciprocated. But he puts them aside and questions her hard about her role in turning in Snow years before as well as her possible role in the deaths of Snow and Lemp and the kidnapping.  Unsurprisingly, Cross gets himself thrown out for hit trouble.

The police investigation into Lemp’s background, plus Cross’s astute questioning of Mrs. Steifel, establish that Lemp was Lawrence Steifel’s father. His real name was Arthur Lempke and he was a lawyer in the Midwest; his wife left him after he was convicted of a crime and disbarred. Lawrence’s memory of being kidnapped briefly by his father is true.  After Lempke was arrested for that crime his mother resumed her maiden name of Steifel (she apparently comes from a long line of stifling women) and took her son to California.  Mrs. Steifel begs Cross not to tell her son the truth but Cross refuses to keep silent.

As it turns out, Cross doesn’t have the chance to tell him.  Ann Devon, his assistant, figured it out and not only told Larry herself, but brought him to say goodbye to his father.  As Peter Wolfe points out, this scene is the true meaning of the title.

Larry’s exposure to the truth through Ann galvanizes him to revolt against his mother and resolve to marry Ann, who Mrs. Steifel disapproves of. When Cross last sees them they are holding hands in a restaurant.

Anyone who dislike plots involving hidden paternity has no business reading Ross Macdonald in the first place. Hidden family roots appear as early as The Dark Tunnel and in the majority of all the works that follow.  But this one is not organic to the plot.  The entire book could have been written without either Ann Devon or Lawrence Steifel.  A more charitable reviewer would call it enriching; for me, it seems tacked on.