MEET ME AT THE MORGUE Part Seven 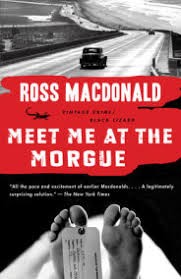 It’s too much to expect to get through an entire Ross Macdonald book with an eavesdrop.  At least he held off his impulse far as Chapter 27. But this one was worth waiting for.

A Note on Eavesdropping

In a world that turns on intercepted electronic communications, pings on cell phones, GPS coordinates and similar electronic wizardry, acquiring information just by overhearing it seems quaint.  But thirty years ago, it was still an important tool. Eavesdropping is very useful in fiction.  The information conveyed was necessarily fragmented and ambiguous.  The speaker and listener didn’t need to spell out their plans or their references.  They could even argue about their plans, creating even more uncertainty.  Last, since eavesdropping can only involve the persons in the room, it’s easy to disguise the identity and even existence of absent members of the conspiracy. And if the eavesdroppers are not visible to the detective, my mystery is even deeper.

I miss this convention.  To listen, the detective must place himself in danger, or at least in a place where there is no innocent explanation for his presence. How many stories have you read where the eavesdrop is interrupted by someone placing a gun to the head of the detective?

Molly Fawn has left her informal police custody and returned, predictably, to the only place she knows, the small room in the back of the photographic shop.  Cross has the police park nearby and he creeps up on the shop, Cross listens to Molly argue with a man about what the division of the spoils will be—Molly offers ten thousand and the man counters at 50/50.  During the discussion it’s clear that Molly does not have the money herself; she only has a clear idea of where it is.  And that it is in the control of a woman.  Further exchanges make it clear that the man is Bourne, the head of the shady detective agency that had briefly employed Lemp.

As Bourne and Molly attempt to leave, they are arrested by Cross and the officer assisting him.  Cross looks at the photograph and recognizes not Helen Johnson but Amy Miller, Fred’s widow.

Chapter 28 Wraps it Up in Style

The chapter begins at the Pacific Point courthouse where Amy Miner has just finished her grand jury testimony and has now been released. She drove away in the Johnson Lincoln, with Helen at the wheel. Cross assumes they are going back to the Johnson home where the boy is.  But when Cross calls to check, Helen’s mother answers—Helen and Amy just left for San Diego to pay a brief visit to Amy’s family home.

As Cross and a detective head towards San Diego, the police are at work; Amy’s maiden name was Wolfe and they are able to narrow it down to a small family-owned grocery store in a working-class neighborhood.  They managed to beat Helen’s car and they have some time to talk to Amy’s father, a brutish man but with no reason to lie.  He provides more details on the years immediately after the war:

At that moment, Helen and Amy appear at the door.