MEET ME AT THE MORGUE Part Eight 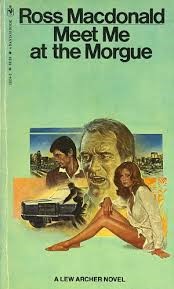 The reader will no doubt have a sense of relief that the trip from Pacific Point to San Diego was not at gunpoint. Helen has been through enough for one week. More practically, if Amy could simply talk Helen into giving her a ride to see her bereaved family, since Amy doesn’t have a car of her own, there would be no need to use force.  All Amy needed to do was to play on whatever sense of guilt Helen felt about the death of Fred. With Helen’s feelings about the death of her own husband in flux, the right words at the right time were, literally, a free ride for Amy to where the money was waiting in San Diego at her father’s store.

Amy is confronted with the money, which proves she killed Lemp, and she tells her story.

Her confession is over at the bottom of page 211 in the Vintage Crime trade paperback edition.  Unfortunately, there is a page 212.

The last page is a portion of the drive back from San Diego back to Pacific Point with Cross and Helen. The dialogue is a series of veiled apologies for each thinking badly of the other. Then Macdonald drops his bomb:

“Her body lay away from me in the seat like a mysterious county I had dreamed of all my life.”

From there the conversation shifts to how she is in love with him, and that he wants to spend the rest of his life with her. They agree that they will have to wait a little before marriage; Cross assures her he can wait and she puts her hand on his shoulder.

You have now read all 212 pages, or at least been exposed to their content.  If you had two copies of this book, one with the 212th page and one without, which would you recommend to a friend?