MEET ME AT THE MORGUE Part Nine 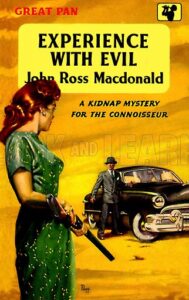 Masterful But not Perfect Plotting

Peter Wolfe, in Dreamers Who Live Their Dreams, rightly calls this a “tightly built novel.”  Everyone who is important to the resolution of the mystery is on stage by Chapter Five.  The later-appearing characters are cogs in the wheel but the core nexus of motivations is already there—if only we understood what was in front of us.

The Core is First Rate

Macdonald plays the reader like a piano.  We suspect Helen because she is rich and because she delegates the care of her only son to others. We suspect Fred Miner, of course, but Macdonald goes miles out of his way to talk about his bravery, his heroism, his positive qualities—Macdonald even opens the book with a scene showing the happy and positive relationship he and the boy share.  The author is almost daring us to think Fred would hurt the child, no matter what the facts might say. Then Macdonald tosses in the mysterious February corpse. How does a hit and run victim come to have no identification, especially when the driver is so drunk he doesn’t even remember?

Unlike Galley in The Way Some People Die, Amy Miner gets a full chance to explain herself—her abusive upbringing, her passion for Kerry Snow during the chaos of the war, her resentment at how Fred and her father had conspired to take him away.  Instead of being with the man she loved, she is saddled with a near-cripple.  And not just any near-cripple—the one who imprisoned the love of her life.  She has made the best of it all these years but this woman has an ocean of motivation.

This is one of those mysteries, at least for me, where I slap my palm to my forehead and the end and concede, ‘You got me this time, Ross.”

It is a mark of Macdonald’s talent that we do not suspect Amy until it’s thrust in our face. In retrospect there were plenty of clues.

The Side Plots, Not So Much

The first two could be collapsed for purposes of discussion; and perhaps should be because it is the discovery of who his father is that triggers his resolve to marry.  To me, it’s all a distraction, a series of events that go off at right angles to the rest of the plot.  Further, we have no reason to care about these people. Ann is an office flittergibbett and Steifel is a self-pitying drunk whose only concrete achievement is wounding one of the more sympathetic characters, ultimately causing his death.  It’s hard to feel any joy when they announce their decision to marry, and even harder after the narrator throws cold water all over it with the prediction that they are bound to fail.

The recognition of paternity has no other consequences. The only structural justification I can see for the paternity dog and pony show that links Steifel and Lemp is to justify
Steifel’s decision to marry.  If I am not missing something, then Macdonald went to a lot of trouble for nothing. I can only surmise that in an earlier version of the book something more came of it.

The other subplot, the romance between Helen and Cross, needs to be considered.  The first two subplots only cost the author some additional hours at work. They don’t hurt the book except that the subplot is irrelevant.  But by deciding to include a romantic partner for his detective, Macdonald made the decision to sideline Archer and that was a serious decision indeed.

I will argue that it was a bad move: