MEET ME AT THE MORGUE Part Ten 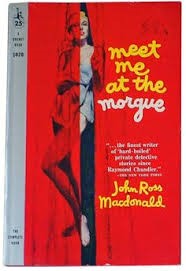 Meet Me at the Morgue is a fine mystery. Technically, it shows a solid advance over the preceding Archer books.  But the book sold poorly, and is little discussed today, because of a couple of what I will call strategic flaws.

First, Macdonald underestimated the draw of Lew Archer. He only realized it too late when he saw how much the critics and his fans missed their familiar detective.  He would only make that mistake once more.

Second, Macdonald’s only clear reason for abandoning Archer was to provide an opportunity for a romantic aspect to the story.  But Macdonald overestimated his ability to write a romantic theme.  The oldest writing advice in the world is to write what you know. He has no clue how a woman and a man gradually come together, find attraction and then love.  How could he?

“A Man Has to Know His Limitations”

This observation from a Clint Eastwood movie came along thirty years too late to help Macdonald, but it reveals the reasons for this flaw in the book. If Macdonald had refrained, as he does in all the later Archer books until The Blue Hammer, from attempting the kinds of scenes he couldn’t write, Meet me at The Morgue could easily have been the fifth successful Archer.

Briefly, let the Critics Have Their Say

Bernard Schopen calls it “a step backwards in Macdonald’s development.”

Peter Wolfe, in Dreamers Who Live Their Dreams, praises much about the book but is suspicious of the romantic ending. “Mood notwithstanding, this romantic resolution rings false on too many grounds. Helen and Cross, who meet the day before her husband dies, have only known each other a week; they’ve never been alone together; nothing indicates their special feelings for each other.”

Tom Nolan, Macdonald’s biographer, describes sales as “sluggish.” The poor performance of the book caused Macdonald trouble with his publishers when he was negotiating for the sale of his next book, Find a Victim.