Find a Victim — Part One 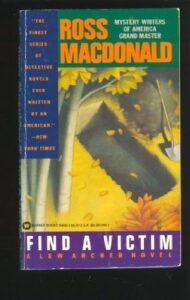 “Find a Victim is the noir-est of Macdonald’s early Archer novels . . .  the bottom line of Find a Victim is negative . . . Macdonald finds the penal code next to irrelevant in describing or correcting human corruption.”

Michael Kreyling, in The Novels of Ross Macdonald, offers little direct evaluation of the merits of the book.  He spends most of his time describing the use of Christian symbolism of suffering, from the name of the town (Las Cruces) the names of characters (the Church family) to repeated biblical references.

Peter Wolfe, in Dreamers Who Live Their Dreams, finds some merit in the ambitious structure of the novel and calls it the end of the author’s apprenticeship.  “The works following Victim, blending mellowness and tang, take on the vintage Archer flavor.”

“. . . Find a Victim remains one of Macdonald’s less artistically successful novels. If it recovers from the ineptitude of its opening chapters, it can neither escape the conventionalities of the hijacking plot nor relate that plot other than superficially to the primary sexual theme. . . . The result is a novel of gripping pieces.”

Bernard Schopen, in Ross Macdonald, spends only a page on the book but delivers what I think is a succinct and accurate analysis.

“Find a Victim (1954) marks the return of Archer in one of Macdonald’s most striking opening images and one of his most rapidly developing plots [but] the entirety of the smuggling plot has a simplistic “cowboys and Indians” quality about it and ends with a ghost town shoot-out reminiscent of stereotypical Western movies.”

Jerry Speir, in Ross Macdonald, is usually more charitable than other commentators, but even he is put off by the thematic contradictions between what he calls the “masculine” smuggling plot and the story of “sexual intrigue and feminine oppression” that comes to dominate and then overwhelm the original plot.

His hardcover publisher, Knopf, found the book “disappointingly weak” and instructed Macdonald to remove many of the sexual references and tone down the violence.

The Mystery Guild declined to do a book club edition at all.

Pocket Books, his softcover publisher refused to reprint it.

Fortunately, Macdonald’s agent was able to place the paperback rights with Bantam Books, which at that time was a small and newly established company.  However, Bantam insisted on changes of its own—it wanted Macdonald to make the sex and violence more overt, in the manner of Micky Spillane.

The Result, A Book by Committee

Find a Victim is an uneven book on multiple levels. Almost every commentator notes the awkward mishmash of multiple inconsistent themes.  That part is Macdonald’s fault.

What also varies wildly is the tone.  On some pages Archer is a wise priest-like sage dispensing wry wisdom and practical advice. On others he is a testosterone-pumped reincarnation of either Micky Spillane or Johnny Weathers from Blue City.   Archer’s character is inconsistent to the degree that we question whether we are dealing with an unreliable narrator. I lay this fault at the feet of the conflict between his hardcover and softcover publishers. As Tom Nolan points out in Macdonald’s biography, the plot of the book was too complex to make structural changes, at least on short notice. All the author could do to satisfy the conflicting demands was a quick and dirty rewrite of selected scenes.

Knopf disliked the book even after Macdonald made the suggested changes—possibly because Macdonald had made other changes in the opposite direction to make Bantam happy.  Knopf made only toke efforts to promote the book and ordered a small first printing.  Sales in hardcover were modest and the reviews did not help:

Bantam was a more aggressive publishing house than Pocket Books and was not shy about getting Macdonald to commit to writing mysteries every year, preferably Archers.

Macdonald, in need of money and discouraged by the lack of success of Meet Me at the Morgue, was receptive even though he confessed to being somewhat tired of the character.