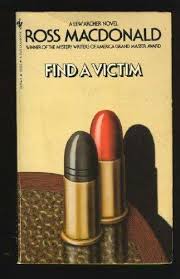 Macdonald was always sensitive to the importance of his first scene. He employed many different openings—the knock at Archer’s office door in The Drowning Pool and The Ivory Grin; Archer’s appearance at the home of the client (The Way Some People Die) or at the office of the lawyer who is offering him a case (The Galton Case); or a description of his approach to the home of a wealthy client, as in The Moving Target.  More rarely, he opens with an unexpected encounter, as in Meet Me at The Morgue or The Doomsters.  But never does Macdonald thrust us into the action quite the way he does here:

“He was the ghastliest hiker who ever thumbed me. He rose on his knees in the ditch. His eyes were black holes in his yellow face, his mouth a bright smear of red like a clown’s painted grin. The arm he raised overbalanced him.  He fell forward on his face again.”

Macdonald will write openings that are more poetic, more drily ironical, more elegant.  But for sheer power, this one is unmatched.  And as Peter Wolfe points out, Macdonald’s description of Archer taking care of the dying man is reminiscent of the Pieta and is the first of many spiritual metaphors that underly the book.

Archer is alone in his car on a lonely desert road.  He stops and finds that the man has been shot and is barely alive.  Archer tears off his own shirt and uses his tie as a tourniquet. With no other options, he loads the now unconscious man into the back seat and speeds up the road.  Archer doesn’t know the area and it’s getting dark.  He passes an abandoned Marine Corps base that will later figure into the plot. Pressing on, he sees the lights of a city in the distance, and then, close by, a motel.  Archer stops, rushes inside, and asks the receptionist to call the hospital for an ambulance.

And then, before we even get to the bottom of page two, the air starts to drain out. The woman at the registration desk, Kate Kerrigan, is interrupted by her husband, Don Kerrigan, a man so belligerent and obnoxious that their argument hijacks the scene. Archer bristles at Don’s rudeness to his own wife and the two of them square off in a verbal confrontation.  As distracting as all this is, we at least learn that Don knows the injured man—his name is Tony Aquista and he is a truck driver for the Meyer trucking company in town.

Archer follows the ambulance to the hospital, partly from a sense of duty and party just to get out of the motel office.  Aquista dies at the hospital without regaining consciousness.

Archer is interviewed by the sheriff, Brand Church, and learns that the town he is in is Las Cruces.  Archer leads the sheriff to the point where Archer picked up Aquista.  Aside from some blood that confirms Archer led them to the right spot, there are no clues.  The police speculate that Aquista was dumped from a vehicle, which will turn out to be correct.

Las Cruces will prove to be one of the most unpleasant places we will encounter in all of Macdonald’s oeuvre.  And Chapter Three is only a brief introduction to the desperate personal situations between unlikable people that litter the landscape.  A useful rule of thumb in this book is, when you consider any two characters of the opposite sex, assume that they were once lovers and now despise each other.

“Cheer up—things could get worse.” So I cheered up and things got worse.

Ready for some more?  We’ve only covered three chapters.  Our toes are barely wet.