I Swear I Had a Client Around Here Somewhere 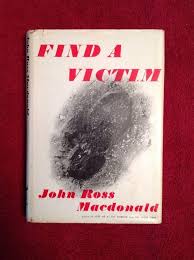 In all the Archer books, Macdonald is careful to provide Archer with a client, no matter how far afield the investigation strays from the original assignment. Sometimes Archer foregoes a written agreement, but he always makes the financial terms clear and nearly always gets a retainer—even if it is a token amount from someone with no apparent ability to pay the full cost of the investigation. Several times Archer makes observations about the invisible bond created by the exchange of even a small among of money.  The client bond is important to Archer, and rightly so. Having a client transforms Archer into someone who will follow the trail with a clear goal in mind, even if (as sometimes happens) that trail leads back to the client.  Speaking as a lawyer who spent his career working for private clients, this is a strong point in the series.  It grounds Archer in the workaday world of paying bills and provides a code of conduct.  Even fictional private eye businesses have to pretend to cash flow.  (I always thought it was a weak point in The Maltese Falcon that Sam Spade didn’t get a dime for his trouble.)

Find a Victim is an exception to Macdonald’s normal practice. Archer will briefly have a client of sorts and then will be fired. He spends the second half of the book working on no one’s behalf but his own.  Macdonald wisely refrains from asking Archer to explain himself.  The closest we get to a reason is at the start of Chapter Four when he mentions his attraction to Kate Kerrigan and his dislike for her husband.

Archer parks near Kerrigan’s motel and follows him into Las Cruces, where Kerrigan has a rendezvous with a cheap, flashy young woman in a private room in a restaurant.  Implausibly, Archer is able to eavesdrop.  The woman was desperate to see him because she is a marijuana addict and is about to go through withdrawal unless she can get some. Yeah, that’s what the text says. Deal with it.  Although Archer learns no details, it’s clear that something important is about to happen.

Archer follows the young woman on foot to a dilapidated apartment building but loses her.

He has better luck at Meyer Trucking, which owned the truck that was hijacked.  Archer ingratiates himself with a night watchman who seems not to understand that loyalty includes discretion and comes away with important information:

Archer’s next stop, in search of information and maybe even a client, is the home of Meyer, the owner of the trucking company.  He lives in a large, dilapidated filthy house surrounded by wrecked and abandoned cars.  His eldest daughter, Hilda Church (the wife of the sheriff) is attempting to make some headway with the mess.

Mr. Meyer is in the basement, doing target practice with a revolver in the basement. Never a good move in the middle of a mystery where someone was shot on page one.

Meyer has a mean and crusty exterior, but underneath he is even more mean and crusty.  This book was written long before the script for Chinatown, but if you have the father of Fay Dunway in mind, played by John Huston, you will have an appropriate model, for multiple reasons: