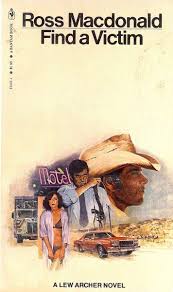 Nothing happens by accident in a Ross Macdonald book, and the car ride with Hilda Church is no exception.

How About Some Evidence?

Macdonald enjoyed describing Archer’s searches for physical and documentary evidence. They allow the reader to actively partner with the detective, poring over a jumble of articles, some clearly irrelevant, some with obvious meaning, and some that provide a puzzle.  Macdonald’s favorite object is a battered suitcase in a motel or rooming house; it brings back memories of his father’s own suitcase, and it has the practical effect of concentrating the search. If it was important enough for the traveler to carry, it’s important enough for a look.

This time we are searching Anne’s home, not a transient location, so we will have to dispense with suitcases for the moment.

Time for a Good Quote

On the walk up to the apartment door in the darkness, Archer disturbs a palm rat the scuttles out of his way. The front door lock is broken.  Once inside, Archer checks out the bathroom medicine cabinet:

“Shutting the mirrored door, I saw my face through the tiny snowstorm of toothpaste specks on the glass.  My face was pale, my eyes narrow and hard with curiosity. I thought of the palm rat running in his shadow on the sidewalk. He lived by his wits in darkness, gnawed human leavings, listened behind walls for the sounds of danger.  I liked the palm rat better when I thought of him, and myself less.”

There is no suitcase but the search is productive anyway.

Archer’s search is interrupted by the appearance of Sheriff Church.  Their conversation is strained, but once Church is persuaded that Archer isn’t a burglar. They exchange some information.