I’ve Got Friends in Low Places 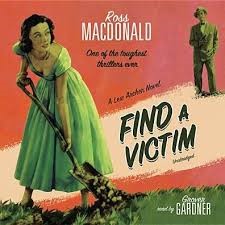 A few slaps with the Sheriff’s automatic have apparently shaken the stupid out of Archer, because his next move, to Kerrigan’s bar, the Golden Slipper, is a good idea.  The bar boasts very few customers, a bored bartender, and several women who are obviously prostitutes.  A gold mine of information awaits.

Archer starts with the bartender.

Archer moves on to one of the prostitutes.

Predictably, Chapter Ten takes Archer to Jo’s apartment.  Now that he has a name, he can buzz her apartment.

Knowing from his eavesdropping in the restaurant that Jo is a “marijuana fiend,” Archer takes five joints that he had in his car for other reasons and uses them by way of an introduction.  She is suspicious of seeing a stranger rather than Kerrigan, but when she sees the five joints all caution disappears and she frantically begins smoking them to ease the agony of marijuana withdrawal.  We all know what that’s like, I’m sure. I will take plenty of time to embarrass Macdonald about his naivete about marijuana later; for now let’s just keep moving.

When Archer goes down a back alley to look for her he is confronted by a young thug named Bozey, who beats Archer into unconsciousness with a pair of brass knuckles and steals his wallet and wristwatch.

When in Doubt, Eavesdrop

This is the second eavesdropping involving Archer (we will later learn that Aquista eavesdropped on Anne Meyer before the action opened.)  The venue for this one is the Kerrigan residence. Don Kerrigan is leaving Katie, his wife of seven years and it’s every bit as painful, sad and melodramatic as you would expect.  I will stick to the useful information gleaned from twelve pages of text:

And a Little Tailing Wouldn’t Hurt, Either

Archer follows Kerrigan and sees a tough-looking young man (whom we will later learn is a  Bozey) give Kerrigan a parcel.  He then follows Bozey to the abandoned Marine Corps base and finds the hijacked truck hidden in a hangar. It starts to move before Archer can reach the hangar.  He fires his revolver at the windshield several times, without effect.  Archer jumps to the side and the truck flies past him.  Fortunately for Archer, the people in the truck ignore him and the truck keeps going.

The hangar is empty except for a beat-up car with California plates and no registration.

Archer guesses that the hijacked truck is trying to get out of the area by Las Cruces Pass, the route leading back to town.  He follows in the dark.  After a few miles he finds Sheriff Church, alone, manning a roadblock for the hijacked truck.

He decides to pull into Kerrigan’s motel for the night and put it all behind him.