The Worst Motel Stay Ever 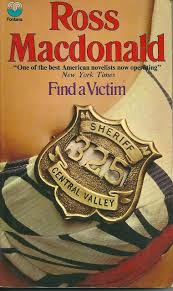 The lights are on in the office of Kerrigan’s motel, giving Archer a clear view of the owners’ brains.  Kerrigan had been shot once, between the eyes, with a gun that Archer guesses might be a .38.  Archer finds no wallet and no trace of the package Boozey had handed him earlier.

As Archer looks through the motel’s financial records he hears an engine start from the direction of the carports. He runs outside in time to see Jo Summers driving by in a sports car. Archer raises his gun to fire but he is struck from behind and knocked down. After he subdues his assailant he discovers that the man is Sal Braga, a cousin of the murdered truck driver and a deputy sheriff.

Jo has stolen an MG belonging to one of the other motel guests.  Without any idea of where she might have gone, Archer decides not to give chase.  He has a better idea.

Interview With the New Widow

Archer goes to the Kerrigan residence, but instead of hiding in the shrubbery this time, he knocks on the door.  He tells Katie the news about her husband and gets some new information.

The cabin yields its clues:

The summer season is over and the cabins are closed for the winter, but Archer finds an elderly woman who runs the filling station.  She has plenty of opinions and even some information.

Archer drives over to The Inn and interviews MacGowan, the owner.

In Chapter 18, Archer has concluded his business in Lake Placida and is on his way back to Las Cruces when Katie Kerrigan, who drove up and is waiting by the roadside, flags him down.  He tells her what he has learned (which the reader already knows) and she repeats that she doesn’t know exactly what her late husband did Monday. She tells him that the sheriff is upset with him and that Deputy Braga is angry enough to want to kill him—not news, either. She finally admits she drove up to see Archer again.  After several pages of dialogue they kiss and her hat falls off. Then for no reason she seems to change her mind about the whole thing and they drive separately back to town. Hot stuff.