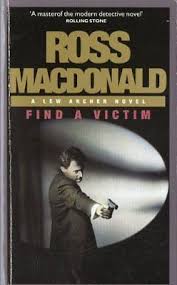 After the strange fumblings of Chapter 18, it’s good to get back to the action in Chapter 19.  Well, not so much; the fumblings in this chapter are logical rather than physical.  The chapter opens with Archer talking to Meyer.  For someone who has a poor relationship with the sheriff and who spends his time either in the basement of his home or in a cubicle in the corner of his warehouse, he is surprisingly well informed.  (No, he is not part of the hijacking—he just happens to know things that he has no reason to know.)

Meyer leads Archer to his home, where Hilda is staying.  Archer shows her the broken heel and Hilda identifies it as a pair that Anne owned. She also says that Anne wore bobby pins similar to the ones Archer retrieved from the cabin.

Following these disclosures, the conversation between Meyer and his daughter degenerates into yet another argument, the upshot of which is that Meyer fires Archer and refuses to even pay the hundred-dollar retainer.

Without a Client and Fist Fighting with the Sheriff

While Archer is talking to Hilda, Sheriff Church shows up and assumes Archer is interested in her romantically.  The two of them brawl, with Archer coming out on top.

Hilda agrees to return home with her husband.  The sheriff offers to let bygones be bygones with Archer, but Archer refuses and says that he is going to remain in the county, even without a client, till the case is resolved. It’s an odd decision.  As Archer himself notes, “I couldn’t think of a single solid reason for staying.  So I drove across town to the courthouse, accompanied by my Messianic complex.” Macdonald can’t fix this problem with the plot, but at least he acknowledges that it’s there.

Interview with the District Attorney

Archer speaks at length with the D.A. It’s a difficult conversation because Archer has suspicions about Church’s honesty that he is reluctant to share.  Whatever Church is mixed up in, the D.A. may be, too.  But Archer learns a good deal.

Another Odd Conversation with the Widow

Kate Kerrigan makes another appearance.  She is sitting in Archer’s car when he leaves the courthouse.  She has come to tell him that MacGowan has called from Lake Placida and is on his way to her house to meet with Archer.  The entire chapter is dialogue between the two while they wait. Specifically, she flirts with Archer by asking questions that seem both provocative and passive aggressive at the same time.  Archer responds in kind, as is his wont.  The conversation leads nowhere.  We are put out of our misery by the arrival of MacGowan.  The last mention of Kate Kerrigan is that, after Archer and MacGowan speak, Archer notes that he says good-bye to her. After that she is forgotten.