The Pace Picks Up 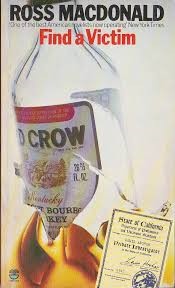 MacGowan comes bearing important news. Jo Summer has been to see him, asking for directions to the town of Traverse, which apparently is where Bozey is waiting with the hijacked truck. (Macdonald was always a careful plotter—by making Jo his granddaughter he gives MacGowan a good reason to be interested in what happens.)  It’s a narrow mountain road to Traverse, but it’s passable for a big truck if driven carefully.  When Archer asks MacGowan to draw him a map, the old man refuses—he insists on going along to rescue his granddaughter, bringing along his hunting rifle.

As Archer and MacGowan are on the mountain road to Traverse a filling station attendant tells them that a woman answering Jo’s description, driving a sports car (the MG stolen from Kerrigan’s motel) passed by heading that direction several hours before.

After some miles of torturous mountain road they encounter Jo driving the MG coming back from Traverse.

A Bloody Conclusion to the Hijacking

Leaving the MG in the road, Archer and MacGowan continue to Traverse.  They find the three thugs in the process of transferring the last of the liquor to a van.  Archer and MacGowan open fire, killing one of them and wounding another.  The two survivors drive away in the van, headed back up the mountain road toward Las Cruces.

Bozey is there, badly beaten but able to answer questions.

The Beginning of the End