“It is the murderer rather than the detective who must be the center of attention if the mystery is to have a genuine tragic interest.” 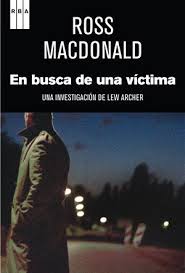 The last chapters of the book, although told through Archer’s eyes, are really about Brand Church.  It is painfully clear that the marriage being written about in the emotional climax of the book is not Archer’s (who is long divorced) or even Church’s, but rather the author’s.  Some friends of Macdonald admired his sense of duty in staying in his marriage.  Others felt it was an exercise in masochism or perhaps even a failure of nerve. But everyone agreed that mostly it was a miserable and unhappy relationship.  Macdonald was painfully aware of his lot in life, and sometimes deliberately engaged in innocent flirtations, usually with unavailable women, as if to demonstrate his own ability to draw the line.

Church is Macdonald’s alter ego. He goes over the line and is suitably punished.  But the vengeance of the universe for a weekend of whoopie is almost ridiculously disproportionate. In some respects Macdonald never escaped his fire and brimstone early years.  For him, fornication is not punished with just a no-fault divorce.  Fate is not satisfied until the landscape is filled with bloody corpses.

How To Think About Find a Victim

Its virtues are more apparent upon reflection.  While the reader is immersed in the story it meanders, changes tone, and is littered with abandoned subplots.  The last two chapters, on first reading, are out of tone with the rest of the book.

The core defect is that Macdonald promises one kind of book in the opening pages and winds up delivering something very different.

If Macdonald had set out to tell that story instead of entangling himself in a cops and robbers hijacking tale, what kind of a crime novel would result?

Approaching the Church-Meyer affair from this angle, it is apparent that the tawdry hijacking plot is a distraction from the serious real life issues Macdonald raises but fails to address in a direct and adult fashion.

Ever since The Three Roads Macdonald attempted to fuse the form of the detective story with the moral concerns of the literary novel. It is an unstable combination.  The yardstick for judging a mystery is whether it’s clever. From a serious novel we expect illumination into the human condition. He will get much better at it over time.  In his mature books he will succeed in a spectacular and unforgettable fashion. As Bernard Schopen notes, Find a Victim is an artistic failure.  But at least Macdonald had his ambitions, and for that he has my admiration. It’s always interesting to watch him try.

Ready for The Barbarous Coast?