And the end of all our exploring
Will be to arrive where we started
And know the place for the first time. 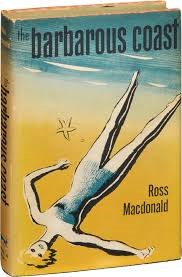 Macdonald’s books are road books.  His detective is often on the move, especially in the early books.  Even after The Moving Target, where life focusses in California, there are frequent trips between Los Angeles, San Diego, Las Vegas, and his various fictional towns.   Driving is a quintessentially American activity. It gives his work momentum.  He may be digging into something that happened a generation ago, but the drive from Los Angeles to Long Beach is something happening in the here and now.

For all the physical motion, the detective often finds himself returning to the same place.  This circularity becomes stronger as the series progresses.  To simplify Macdonald’s view, evil comes from families, especially powerful and rich families.  And those families tend to have elaborate houses and estates passed down through the generations.  Evil is rooted in such places and Archer will find himself drawn to them repeatedly in many of his books.  The best examples we have seen already is the seaside mansion in The Moving Target and the doctor’s house in The Ivory Grin.  As you will see, we have two blighted places in this book, a mansion and the Channel Club.  Speaking of which . . .

Welcome to the Channel Club

The book opens with Archer’s arrival at a luxurious seaside resort perched on a cliff above the sea.  As Wolfe points out, the locale is an apt metaphor for the instability that goes on inside.

The action begins midway down the first page. Archer announces to the guard at the gate that he has been summoned to meet with Mr. Bassett, the club manager.  As the guard opens the gate a young man (who we will learn is George Wall) rushes through the open gate and only stops when the guard draws his gun. Wall is also there to see Bassett, and Wall tells Archer to warn Bassett that he won’t leave until Basset agrees to meet with Wall and tell him where his wife is.  Archer has a conversation with the guard, an older man named Tony Torres, who was a boxer in his younger days. Archer, a fan of boxing, was aware of his career.  The interaction seems unnecessary now, but Tony Torres and his relatives will figure large in the story.

After briefly meeting a young man in charge of the pool, Archer is taken to the office of the clubs’ manager, Clarence Bassett.  In The Way Some People Die, Macdonald had created an affectionate caricature of Dashiell Hammett to flesh out a minor character.  This time he skewers Raymond Chandler by creating a central character easily recognizable as a cruel parody.  Bassett and Chandler have the same general physical appearance, the same fondness for drink, the same attraction to older women, and the same tendencies to lapse into bouts of self-pity.  For a complete description of every point of comparison I refer you to Peter Wolfe’s exhaustive discussion.  It is an ugly exercise, and it’s unnecessary to the plot.  I personally am no huge fan of Chandler—he wrote many overpraised books and his reputation rests on a rather slender body of first-class work—but Macdonald’s remorseless assault on Basset is mean-spirited. It is no secret that Chandler treated Macdonald badly, but Macdonald’ revenge diminishes Macdonald, not Chandler.

The unreliable client is a staple of detective fiction, and Macdonald takes full advantage of the reader’s expectations. Initially, Basset wants to hire Archer to “get rid” of Wall; when Archer refuses and mentions that Wall told him that he wouldn’t leave without speaking to Barrett, the facts (or at least the version Barrett is willing to convey) spills out:

Barrett indeed knows the woman. Her maiden name was Hester Campbell and she had ambitions of becoming a champion diver.  Barrett had given her permission to use the club pool for diving practice years ago when she was a teenager.  She is about 22 now.

After some discussion, Archer persuades Bassett to meet with Wall.  While they are waiting Archer examines a photo of three divers caught at the peak of a coordinated swan dive; Barrett explains it was taken several years ago when Hester was training for the national championship.  Hester, a blonde, is on the left; a young Hispanic boy is in the middle and the girl on the right, a full-busted brunette is Gabrielle Torres.

Gabrielle was shot to death two years ago and the crime was never solved.  And in case the last name rings a bell she was the daughter of Tony Torres, the security guard.

At that point, at the end of chapter two, George Wall knocks on the office door.