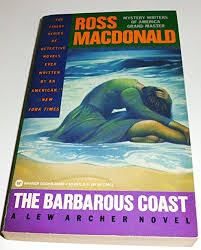 Although Tony Torres had been looking for Wall to escort him to Basset’s office, Wall had taken matters into his own hands and scaled the wall, cutting himself and his clothing in the process. It’s a small point but it’ a good introduction to his impulsive character.  Wall can be relied on to ignore any instruction to stay out of the way no matter what the circumstance.

Basset is reluctant to allow Wall inside and displays a gun briefly before Archer takes it away.  But when Basset sees two of the most influential club members approaching, he decides it’s better to have Wall in his office, out of sight.

The members are Simon Graff, a major studio producer, trailed by his wife, Isobel, a dazed, pale woman dressed all in black.  Although the only conversation at that point is about a party Graff is hosting that night, the two of them will also figure large in the story.

We Need to Talk about Hester

At last Wall has his chance to question Bassett:

And then, in a surprise move, Basset hires Archer to help Wall find Hester. He is desperate to get him off the Club grounds before more members start arriving. Wall, understandably suspicious, refuses to accept his money. The problem is resolved by a toss of the coin and Wall will be paying for Archer.

On the way out, Archer manages to steer Wall away from several confrontations.  Once they get in Archer’s car, more of Wall’s story comes out:

Next Stop, Malibu (But Not the Nice Part)

The address Bassett gave them is a rundown cottage with an air of vacancy.  The landlady lives next door.  She is reluctant to say much in front of Wall but once Archer shoos him outside, Archer gets a better picture of Hester.  The landlady is a fund of information:

Sensing that the information Wall already has had made him volatile enough, Archer relays as little as possible and simply suggests that they visit Anton’s Ballet, where the call originated.