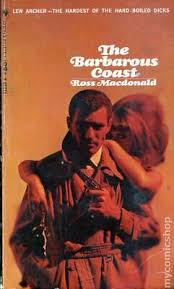 On The Road Again

Although Archer could have gone directly to Anton’s Ballet, he decides to follow up on his most recent lead first, trying to find the identity of the gangster who took Hester away from the Malibu cottage.

it’s time for a coincidence to keep the plot from stalling.  Macdonald contrives Archer’s next break with an interview with the Club security guard, Tony Torres, someone he has no reason to think has any useful current information.  But Archer is one of those people who makes his own luck.  A few pages with Torrez goes a long way towards focusing the investigation.

A less experienced writer would have sent Archer directly to Anton’s, but what would be the suspense in that?  We already know that Hester made the call from Anton’s phone at a particular time, and we know what she said.  There is only so much more to cut along the dotted line. Macdonald is confident enough to do it differently.

Tony might well be suspicious of both Archer and his client, but like almost every minority character we meet, he has a generous spirit:

The chapter is nicely written, and Anton himself is a well-drawn minor character, but the information can be summarized quickly:

Archer makes a telephone call to a friend at the Helio-Graff Studio, confirms that Lance Leonard is indeed signed up for a minor role in an upcoming movie, and even gets Lance’s home address.  He and Wall drive to the house.  Archer makes Wall promise to stay in the car while he goes to the front door.  That’s the last thing that goes right.

Archer takes George to a doctor for his injuries and agrees that George can stay with him till he is well enough to travel.  While George is sleeping, Bassett calls and lets him know that he has just learned that Hester is the mistress of Simon Graff—which explains her sudden prosperity.

Archer’s luck begins to change—probably because he left George asleep back at his house.  He goes to the Taos Shop and learns that Hester’s mother, Teeny Campbell, used to work in the shop, and only quit two weeks before; the story is that Hester has just come into a large inheritance due to the death of her wealthy husband in Canada, and that Hester was going to have her mother move in with her.

He leaves the shop with the address of Hester’s mother.