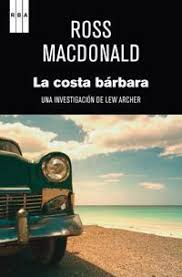 The House of Broken Dreams

Macdonald doesn’t reveal what Archer thinks about the story of sudden good fortune of Hester and her mother, but whatever credit he gave it, doesn’t last long. Teeny Campbell, Hester’s mother, lives in a shack with no phone, crammed with furniture from a larger house.  Hester told her mother that they were moving back to the house they used to own—presumably where the furniture came from—and Teeny is giddy at the news.  In her story to her mother, Hester has mixed fact and fiction—she had a Canadian husband but he was much older than George Wall, was very wealthy, and then died and left Hester plenty of money.  In addition, Hester is going to be a movie star at Simon Graff’s studio.

Teeny was married to a successful silent film star, but his voice wasn’t right for the talkies and the family fell on hard times.  Her husband’s failure only encouraged Teeny in her efforts to prepare her two daughters—lookalikes but not twins—for Hollywood.  Hester swallowed the dream whole, but her older sister Rina shrugged it off and went to school to become a psychiatric nurse. No doubt to get a better understanding of her dysfunctional family, as often happens.

Archer goes to the address of the old Campbell family mansion.  Archer parks nearby.  He sees a man arrive by car and then sees Lance leave.  The car is registered to Theodore Marfeld, who will turn out to be an employee of Simon Graff’s studio. Just to help keep things straight, Marfeld is an ex-police officer who tried hard to beat a confession for Gabriella’s murder from an innocent black man who works at the club as a pool boy.

The moment Archer goes inside, Marfeld knocks him out with a fireplace poker.  As Archer goes down, he glimpses the body of a young blonde woman

Arches wakes up, not in the mansion but in Graff’s movie studio.  What better place to handle the problem discreetly?

It’s Time for a Party, of Course

Archer has been aware all day that Graff is planning a party at the beach club and decides to crash it with Lance’s invitation.  Macdonald does his usual fine description of rich people behaving badly. Through a variety of minor characters Archer learns some important facts:

On Waking up After a Beating

Poor Archer is knocked unconscious in more books than not, and in this one it’s three times. An unconscious protagonist is a powerful and oft-used tool in hard boiled fiction.  It allows time to pass without the detective being able to take any action, and it renders the detective temporarily harmless. Think of how the knockout drops given to Sam Spade in The Maltese Falcon help advance the plot.  It can also be a great way to end a chapter.

Macdonald uses the device often, but he’s never content to just have Archer wake up with a sore head.  It’s always more dramatic; Archer is swimming, or having an absurd dream, or reliving something from his past as he comes back to consciousness. I don’t know if Macdonald genuinely liked the vivid descriptions or whether he was responding to the films of the day that employed blurred lenses, odd camera angles, and other tricks to reflect the detective’s disorientation, but it’s a staple of his narrative.