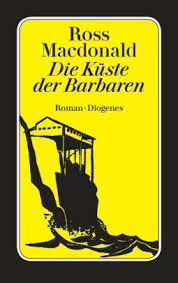 The Pace Quickens, Sort of

Archer spent Chapter 21 through 23, a matter of 18 pages in my edition, in conversation with Tobias. But now he’s ready to kick the can down the alley.  He leaves Tobias’ room, walks to the end of the pier, and spots a body in the water.  It turns out to be Carl Stern, the shady Nevada gambler, and his throat has been cut.

Archer knows there is a strong southward current in the area so he drives north three miles to a beach overlook where he finds Stern’s car, the interior filled with blood and a bloody knife on the floor.

He makes an interesting decision. As he says, “I wanted no part of Stern’s death.” A valid sentiment, but his incuriosity seems odd since there is almost certainly some connection between this new death and the other goings-on at the club.

Archer goes home to bed, apparently without even calling the police.

His sleep is interrupted by an institution younger readers will be unfamiliar with—an answering service with a real person. She informs him that he received an urgent call from a woman in Las Vegas who wouldn’t leave her name or number (why should she make it easy?) and a call from a doctor at a Las Vegas hospital who is holding George Wall, who was picked up at the airport with injuries.  Well, at least we know what happened to George since we last saw him.

Too bad George doesn’t know.  When Archer catches up with him in a hospital room he has only a vague idea of what happened.  He seems to have been beaten and taken to Las Vegas on a private plane but that is all he can remember.  He thinks he was looking at various hotels and bars for Hester.  What happened to whoever was piloting the plane is not clear.

A Slender Clue, But Enough

Wall remembers a building with a Martini glass logo. Although he is far too injured to move, this gives Archer a start—at a hotel and bar called The Dry Martini, a place Archer happens to know. Hester is checked in, but she isn’t in. She left at midnight, wearing a red dress and high heels.

In chapter 26, Archer finally gets to go to work:

Welcome to the Rancho Eldorado

Archer creates one of his most memorable minor characters in the proprietress, Carol Bunch, a woman of a certain age who refuses to take either life or sex too seriously:

“Its office door was opened by a woman who was holding a soiled bathrobe tight around her waist.  She had frizzled red hair.  Her skin had been scarred by a blowtorch sun, except where her careless breast gleamed white in the V of her robe. She caught and returned my dripping glances, letting the V and the robe open wider.

. . . I stepped up into the office.  She held herself in the doorway so that I brushed against her from shoulder to knee. She wasn’t really interested, just keeping in practice.”

She instantly makes him for a detective, but once she is assured he is working for her husband and not Carl Stern, she tells him that the woman he is looking for is here, sleeping off the effects of a sleeping pill Carol gave her.

The conversation almost goes sideways when Carol observes that if he is a friend of Rina’s why she didn’t mention his name.  Archer stumbles momentarily but agrees that it is Rina, Hester’s lookalike sister, that he is looking for.  Which is bad news for Hester.