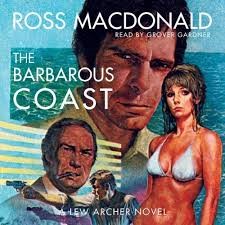 Rina wakes up, still groggy from her sleeping pill, and she and Archer start to talk.  She is still suspicious but she realizes that what he has told her must be at least partly true.

Just as Rina is digesting all this, Frost, Marfeld and another studio thug burst in, presumably tipped off by the cabbie who’d driven Archer to the motel.  A good deal of wrestling and pistol-whipping ensue.  Carol Busch, God love her, even tries to help.  It is not clear to me why the thugs just don’t mow everyone down, but their goal is to take them prisoner.  Archer dukes it out with the three and of course emerges triumphant. Carol Busch shows up with a .45 and ends the fracas.  She is a useful woman to have around. Unfortunately, we have seen the last of her.

With Rina at the wheel of Frost’s Cadillac, Archer forces Frost to guide him to a disused ammunition dump near the airport where they find Hester’s body, which had been doused with gasoline and burned.  After his usual preliminary lies, Frost confesses:

On the flight back, Archer and Rina talk. In a novel written by anyone but Ross Macdonald this would be the beginning of an affair.  Instead, after some generalizations about the human condition, we are left with simply a clue—that Rina worked at Dr. Frey’s private psychiatric clinic and Isobel Graff was one of the patients.  Rina mentions that in the middle of March, Dr. Frey had given her the freedom of the grounds and Isobel disappeared overnight. She returned in the morning, distraught and disheveled.  Rina says she will never forget the date, March 21, because it was the same night that Gabrielle Torres, whom she knew, was murdered. “I didn’t connect the two events at the time.”

Sounds like her psychiatric nursing school owes her a partial refund.

Hester, despite her own lack of education, made the connection immediately and once she got her hands on the gun, she used it to blackmail Graff into giving her a mansion and a movie contract.