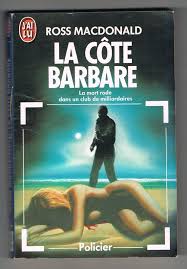 If That’s What You Think, You Ought to See a Shrink

When Archer gets to work, nothing stops him.  After leaving Rina behind at the LA airport he drives to the sanitarium of Dr. Frey, where Dr. Frey lives in a guesthouse.

Of course, Frey is highly reluctant to discuss Isobel Graff, but he is no match for Archer.  In a few pages Archer skillfully breaks him down:

A Return to the Channel Club

But First, a Great Quote:

“Time was running through me, harsh on my nerve-ends, hot in my arteries, implacable as breath in my mouth.  I had the sleepless feeling you sometimes get in the final hours of a bad case, that you can see around corners, if you want to, and down into the darkness in human beings.”

Archer breaks into Simon Graff’s cabana.  He is not surprised to find Isobel’s closet empty and unused.

Archer pulls off a nice piece of detective work.  The closet door has louvers that allow a view of the beach from a certain height. Since Isobel is shorter, Archer drags over a bench and stands on his knees.  He is rewarded with the clear view of the bedroom—and toothmarks she left in the louver when she was watching her husband and Gabrielle.

Archer is interrupted by Tony, the security guard, who is only mildly upset about the burglary and the damage Archer caused to the door; but he is angry about what happened to his daughter and his nephew.  When Archer tells Tony he is looking for Isobel Graff, Tony says she is down on the beach.

On The Beach We Gather Together and Avoid Speech (Mostly)

Isobel is huddled on the sand, muttering nonsense, but a few facts emerge:

At this point Graff shows up.  Archer disarms him and realizes that his gun is the target pistol that killed Gabrielle.  Isobel confirms this.  When Archer points out that ballistic evidence will prove it is the same gun, Graff says that it’s never left his possession.  Archer says that Stern had the gun last night and somebody killed him for it.

Shaken, Graff offers Archer a hundred thousand dollars for the return of the pistol, right now.  When Archer expresses surprise that Graff could put his hands on so much money right away Graff says that Clarence Bassett has it— Graff had just paid him that much that same evening to get the pistol back from him.

It All Comes Back to Bassett’s Office

Archer, followed by Graff and Isobel, knocks on Bassett’s door.