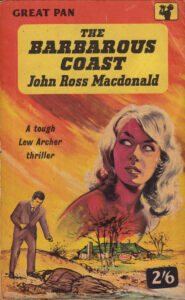 The Good and the Bad

And now the bad:

It was said by Humphrey Bogart (and it was probably not originated by him) that the trouble with the world is that everybody is two drinks behind.  If everybody would relax, knock back a couple, and take time to reflect, we would all come to better decisions.

If Macdonald had taken Bogart’s advice he would have realized that his feud with Chandler and the studios only turned a compact story into a bloated, implausible mess and he would have turned in a better, shorter book.

Next we will pause to give a short historical summary of the debacle Linda Millar caused in Macdonald’s personal life, and then we will return to his next book, The Doomsters.