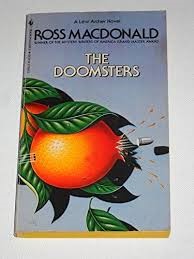 Archer’s next stop, via a cab, is a visit to Carl’s wife—the task he’d promised before Carl stole his car.

Archer’s visit to the hospital was a good narrative move, because his conversations there give him some suspicion that there just might be something to what Carl said.  Without that information, Archer’s decision to keep his end of the bargain with Carl after the carjacking would be puzzling.

Mildred lives with her mother, a self-centered alcoholic, in a neglected house decorated with empty gin bottles. After an awkward few minutes with the mother, Mildred appears:

“She was young and small, with a fine small head, its modeling emphasized by a short boyish haircut. She had on a dark business suit which her body filled the way grapes filled their skins.  She held a shiny black plastic bag, like a shield, in front of it.”

Appearances are deceptive. Mildred is a no-nonsense young woman who isn’t afraid of Carl and dismisses her mother’s fears that he is dangerous.

Archer and Mildred have barely met when Macdonald turns it up a notch with a phone call.  One of the ranch hands has just seen Carl at the ranch and he is carrying a gun.  Archer offers to take her to the ranch in his taxi, but Mildred is reluctant to spend the money and offers to drive Archer in her car.

A Warm Welcome at the Old Hallman Place

Macdonald chooses a remarkable setting for much of the action in the novel. The Haldeman Citrus Ranch is an enormous orange grove, so large that the main house disappears at times behind ridges as they approach.  Orange trees, the fruit not yet ripe, extend in every direction.

Before Archer can reach the house he is stopped by Duane Ostervelt, the local sheriff, whom Peter Wolfe describes as “Macdonald’s wickedest character.” Given that Wolfe has absorbed Macdonald’s life work except for The Blue Hammer, it’s a large claim.  But Ostervelt is fully worthy of the label.  He makes a crude pass at Mildred and insists that he is going to drive Mildred the rest of the way himself.  He throws a number of insults at Archer, who refuses to rise to the bait. Archer ignores Ostervelt’s instructions and drives on to the house.  Not a promising start for their relationship.

Once they reach the house, events unfold rapidly: