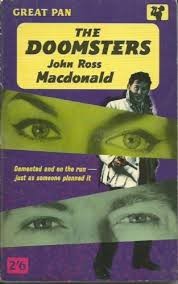 Dr. Grantland leaves with Zinnie and Jerry’s child, a useful way of both getting him offstage and reminding us that a quasi-family unit already exists between him and Zinnie.  The child is going to be a useful excuse at various points in the rest of the book for adults to be here or there, but Macdonald isn’t interested in developing her as a character.  At that moment in his life he’d probably had his fill of daughters.  The only important point to remember is that Dr. Grantland is taking the child to the home of Mrs. Hutchinson, the elderly family housekeeper.  This will become important in about twenty chapters.

Archer questions Zinnie. She is wary of him, assuming he wants to blackmail her, but after some testy exchanges he gets some useful information about the death of
Senator Hallman six months ago:

We Glimpse a Different Side of Archer

“She raised her hand in good-by . . . Ostervelt’s senescent passion for her was easy to understand.  It wasn’t just that she was young and pretty, and round in the right places. She had something more provocative than sex; the intense, grave innocence of a serious child, and a loneliness that made her seem vulnerable. . . . . Mildred’s husband might not live forever. His chances of surviving the day were not much better than even.  If her husband failed to survive, Mildred would need a man to look after her.

“I gave myself a mental kick in the teeth. That kind of thinking put me on Oservelt’s level. Which for some reason made me angrier at Ostervelt.”

The Archer of The Doomsters is unlike any of his other appearances.  He is not the detached, dryly witty engine of investigation.  Here he is a man of strong, sometimes nearly ungovernable passions, and it will make for a muddled ending to the book.

Archer ignores the fresh corpse of Jerry Hallman, which is being attended to by the deputy coroner.  His interest is the “suicide” of Carl’s mother, Alicia Hallman, three years before.  In the world of Ross Macdonald, the sooner you look deep into the past, the sooner you solve the crime at your feet.

The information he gets from the deputy coroner and an investigator hired to look into the death of Alicia Hallman is ambiguous I am slightly condensing the plot here in the interests of spacw) but Archer is intrigued:

In the hallway Archer encounters Ostervelt and confronts him about his attempt to extort sex from Mildred with the drowning theory. After some trading of insults, Ostervelt’s ultimate response is to pistol-whip Archer, badly lacerating his ear. Only the presence of a newspaperman covering the killing of Jerry Hallman keeps things from getting worse.

Archer decides it’s a good time to see a doctor and he knows exactly who he has in mind.