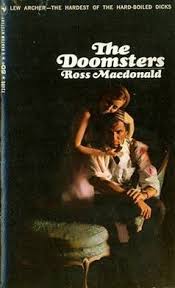 A MEDICAL VISIT WITHOUT AN APPOINTMENT,

PROOF OF INSURANCE OR A CO-PAY

Macdonald always tried to make his stories accessible for future generations and went out of his way to avoid current slang terms, but he could not have foreseen how anachronistic some familiar aspects of life in the fifties would become. (My other favorite is calling the long-distance operator to place a call and depositing coins)

Dr. Grantland is no fool; he knows this isn’t an ordinary medical visit and he is on his guard.  But Archer’s success in at least pinning down Grantland’s story:

Archer’s sense of when to trail a suspect does not desert him.  Knowing that he was the last appointment of the day, and that Grantland mentioned that he was late for another appointment, Archer tails Grantland’s Jaguar to an overlook where he meets another car.  Archer doesn’t have a chance to observe that happens, but shortly after, Grantland speeds away.

Archer gets a glimpse of the driver of the other car and follows him. The driver is Tony Rica, the young man who escaped with Carl and who gave Carl Archer’s name. Rica brings back bad memories; years before, Archer tried to help Rica go straight, and failed.

Tom stops in the parking lot of the Buenavista Inn, a down-at-the heels seaside motel now operating as a bordello.  Archer gives Rica time to get inside and then follows.

The bordello scene is nicely done, with a well-drawn madam who bemoans the turnover because the girls are constantly quitting to get married (!) There are also a couple of dramatic physical confrontations.  But the bottom line is that:

Life Isn’t Always a Trip to the Beach

Archer, on the lookout for Carl, is drawn to a commotion on the beach. Carl had just been there, trying to beg a sandwich from a night-time picnicker, but then ran off when her boyfriend appeared.  Mildred, hearing the radio report, drives to the beach and exchanges information with Archer.  She knows the reputation of the Buenavista Inn and is horrified that Carl would have any connection with the place.  When she asks if Carl is involved with those people, Archer thoughtlessly answers, “A man on the run will take any out he can think of.” Seeing she took his words more harshly than he intended, he puts an arm around her.

“She held herself stiff and silent against my shoulder.

I didn’t think it was. Possibly Mildred knew better. She pulled herself away from me and got out of my car in a single flurry of movement”

Completely self-absorbed, she walks directly into the path of a truck and is only saved by the driver’s quick reactions. She pays no attention to the near-accident, gets in her car and drives away without looking at Archer again.