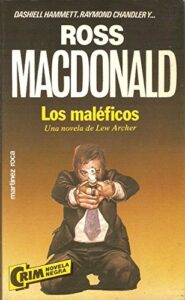 When Mildred arrives at her home, she is annoyed to find Archer’s car pulling up behind her.  There is no reason to think Mildred would have invited him inside, but Mildred’s drunken mother has awoken long enough to open the door while Archer and Mildred are standing on the porch.  Very soon the mother passes out again.  Thanks a heap, Mom.   This is the first of only two appearances by the mother in the book. But she has performed her role by bringing Archer and Mildred together in a situation where conversation is unavoidable.

At that moment the phone rings and Mildred has a brief conversation. She hangs up, upset.  Archer figures out that the caller is Sheriff Ostervelt and that he is on his way to offer his protection from Carl.  Mildred also reveals that the Sheriff is going to be accompanied by Rose Parish, the social worker at the hospital who is besotted with Carl.  It’s unclear which of the two is more unwelcome, but the prospect of their arrival gets Mildred to deliver a little more of the truth.

The next two chapters are a grab bag of incident; like many of the events in the middle of the novel they did not appear at all in the short story.  No summary can quite do them justice so I will limit myself to the elements that advance the plot.

We’ve Got to Get Out of This Place

Ostervelt has assigned a deputy to stand guard at Mildred’s house.  Fearing that the guard has “shoot on sight” instructions, Mildred suggests that just possibly Carl might be at the house of Mrs. Hutchinson, the elderly housekeeper who is taking care of Martha,  Zinnie and Jerry’s daughter.  If that seems like an odd suggestion for Mildred to make you would be right—unless you knew a lot more about what is really going on.