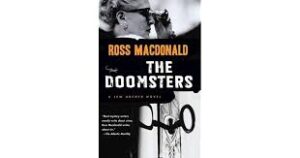 THE PAST IS NOT DEAD OR EVEN PAST:

Archer and Parish drive to the home of Mrs. Hutchinson, leaving Mildred alone with her unconscious mother.

There is a literary tradition, especially in British fiction, of long-time family retainers being discreet and uncommunicative about the foibles of their employers.  That tradition didn’t travel as far as Southern California.  Interviewing Mrs. Hutchinson, at least on some subjects, is like drinking from a fire hose.

When Archer questions her more closely about the gun, the floodgates close and he has to wring several more important facts out of her.

We Interrupt this Investigation for a Manhunt

Carl has been seen nearby and an armed posse of deputies and civilians is roaming the area, prepared to shoot on sight.  Outside, Archer runs into the newspaper reporter who confirms that Ostervelt has been taking protection from many houses of prostitution, presumably including the Buenavista Inn.

The reporter tells Archer that shortly before the Senator’s death, the reporter showed his proof to the Senator, hoping that the Senator would withdraw his support at the next election.  The Senator told him he would think it over and to come back in a week for his comments.

Before the week was over, the Senator was dead.  The Hallman family threw all its weight behind Ostervelt’s re-election.  Which gives Archer yet another suspect.

We Interrupt the Manhunt for Another Murder

Archer and the reporter briefly discuss what role Ostervelt might have played in the Senator’s death and then Archer heads back towards Mrs. Hutchinson’s house. As he approaches he sees Zinnie’s station wagon parked out front. He assumes that she stopped by to say good-night to her daughter.

Passing by the car, he notices that the driver’s side window is down and the keys are in the ignition. Looking more closely, he sees a blanket-wrapped form on the floor in the rear.

When he open the blanket he finds the corpse of Zinnie Hallman, with several visible knife wounds, clearly dead but still warm.

Archer knocks on the door.  Mrs. Hutchison is evasive but Archer forces her to admit that Dr. Grandland arrived in the car, with Zinnie, several hours ago to see the child.  As far as she could tell, the two of them had a routine visit with the little girl.

Archer does not reveal that Zinnie is dead, and simply asks about her background more generally. He gets an earful.