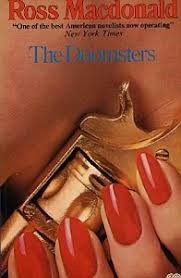 The oldest trick in sleight-of-hand or mystery writing is to distract the observer, and Macdonald does an excellent job by putting the discovery of Zinnie’s body ahead of Mrs. Hutchinson’s confession about Dr. Grantland’s involvement.  If he presented the confession first we would have a premature sense of closure—clearly Grantland is in this up to his neck and all the remains is fleshing out the details.  But the knowledge that Zinnie is dead robs the confession of much of its force and leaves us only more confused.

Archer sees a man unsuccessfully trying to start Zinnie’s station wagon.  The man is Sam Yogan, a Nisei who lost his land to the Hallman ranch after the internment order during the war,. Sam said that a fellow-employee at the ranch had been called by Zinnie and told to pick up the car and take it back to the ranch.  Archer tells him to quit trying—the car has probably been sabotages—and then shows him Zinnie’s body in the back.

Yogan expresses shock and denies having anything to do with the murder; Archer believes him.  Archer makes an educated guess that whoever killed Zinnie, put her body in the car, disabled the car, and then called the ranch to have it picked up was trying to pin the blame on whoever was sent to get the car.

It turns out that Yogan was the driver who took Alicia Hallman to the pier.  He confirms that he was told to drop her at the street near the pier and not to wait—she was planning to meet somebody. Yogan is nobody’s fool; he thinks that whoever it was, Alicia didn’t want Yogan to see.  He denies any conversations with Grantland and did not see the gun that night.

Just aster Archer gives Yogan instructions about how to report the body to the polie, Rose Parish comes out of the house, without explanation, and gets in Archer’s car.  Parish has a useful role to play but her appearance at that moment is left unexplained, except that Archer discourages her from coming along.  She refuses to get out, he refuses to explain himself, so it’s a fast but silent ride at high speed to Grantland’s office.