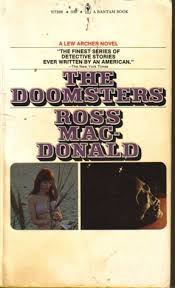 THINGS CAN HAPPEN FAST IN A CLOSED MEDICAL CLINIC

It was an unspecified time in the middle of the night after most people had gone to bed, but Archer’s pursuit of Dr. Grantland doesn’t take him to the man’s home—he goes to the clinic instead, which is of course closed at that hour.

Archer gets lucky.  Just outside the clinic is an injured man, bleeding heavily.  It’s Tom Rica, and Rica explains how he cut his hand breaking out of the doctor’s wire-reinforced windows.  And he has a lot more to say.

Doctors May not Make House Calls but Private Eyes Do

Leaving Rica in the hands of Parish, Archer runs the remaining distance to Dr. Grantland’s house.  He sees Grantland on his hands and knees attempting to clean a huge red stain out of the hall carpet.

Archer doesn’t believe it, but he doesn’t start with the most obvious reasons–that Jerry was in Berkeley and that Sam Yogan did the driving.   Archer is suspicious for a more subtle reason—that it would be exactly the kind of tale to spin to an unbalanced young man who might be inclined to seek vengeance for his mother’s death. Archer’s suspicions are only deepened when Grantland admitted that he showed the gun to Carl, who then ran off with it. (At least that clears up the implausibility of Carl simply stumbling into the gun in the doctor’s office.)

Archer throws out the theory that the blood-spattered woman Rica saw leaving the clinic was Zinnie, wounded by Alicia’s shot, but this fails to shake Grantland.

Turning to Zinnie, they have a conversation that doesn’t add up.

Archer calls him a liar—when he found the body it was still warm and it’s now midnight.

When Archer tells Grantland to telephone the police, he overpowers Archer and knocks him out with the telephone. Then Grantland kicks over the can of cleaning gasoline and starts the house on fire, leaving Archer behind.