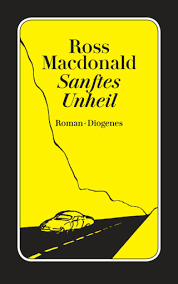 WE’VE GOT TO GET OUT OF THIS PLACE

It may be implausible, as several commentators have noted, for Dr. Grantland to get the better of Archer, who is an armed professional, but the dramatic results are worth it.  As Peter Wolfe points out, Archer has a gift for describing fire, a gift that he will use to his advantage in The Underground Man. His gift was not accidental; his Ph.D. thesis was on the use of imagery in the poetry of Samuel Taylor Coleridge, and he had studied under W.H. Auden.

Archer manages to escape the burning house in time to see Grantland’s Jaguar race away.  Archer follows; at first he thinks Grantland is headed for Mexico, but then the Jaguar takes a different route and stops in front of Carl and Mildred’s house.  Grantland jumps from his car and shoots out the lock.

Wait a Minute—Why is Grantland Going There?

Mildred has disappeared into the recesses of the house, apparently to change. Archer sits down with Mrs. Gley, Mildred’s alcoholic mother, but the only alcohol is vanilla extract and she’s not sharing.  At the very start of their talk Archer gets a break.  He barely had time to glance at the knife Carl was carrying, and it was seized as evidence. But he sees a bowl of apples and asks Mrs. Gley if he can peel one.  But when she goes to get her paring knife, it’s missing.  At least we know where Carl’s knife came from, although why it wasn’t in the kitchen drawer downstairs is another matter.

Mrs. Gley is a good candidate for the Joan Crawford Golden Wire Hanger award for good motherhood.  According to her, Mildred was always a wild and willful child, often running away.  The Sheriff brought her back several times before she ran away for good with Carl, to Berkley.

Mildred became pregnant by Carl while they were living together in Berkely and came home to her mother afterwards, at least briefly.

Archer’s conversation is interrupted by Mildred’s appearance; she is talking to Ostervelt and two plainclothes detectives, close enough for Archer to eavesdrop. She denies that Carl could have killed Zinnie because he was home all evening.  The detectives leave but Ostervelt lingers to make another pass. “One of his hands held her waist. The other stroked her body from breast to thigh. She stood and endured it.” Ostervelt asks her, if she was nice to Grantland, why couldn’t she be nice to him? And he repeats his offer to set her up as his mistress.

Archer watches from the other room. “Anger stung my eyes and made me clench my fists. I hadn’t been so mad since the day I took the strap away from my father. But something held still and quiet. I’d been wearing my anger like blinders, letting it be exploited, and exploiting it for my own unacknowledged purposes. I acknowledged now that my anger against the sheriff was the expression of a deeper anger against myself.  In plain terms he was doing what I had wanted to be doing.”

Mildred does not react to his physical approaches or his promises but asks him if she is the reason he shot Grantland. Osterveld admits it and adds that Grantland had it coming for masterminding Jerry’s murder. Osterveld’s theory is that Grantland encouraged Carl to shoot Jerry.

One more detail comes out—Mildred admits to the affair with Grantland years before but can’t understand how Osterrvelt knew. He tells her that Grantland had told Zinnie and that Zinnie had told Ostervelt that afternoon.

After the final revelation, Archer is stunned to see Mildred at least apparently accepting Oservelt’s proposal.  She gives him a long kiss on the mouth and promises she is in this with him.

Archer has a difficult conversation ahead of him.