“A RATHER HOPELESS CASE” 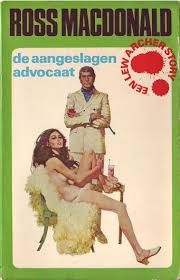 In his study, Sable outlines the task to Archer:

As Sable is walking out with Archer, they have an encounter with Mrs. Sable. She is drunk and full of self-pity saying that no one likes her out here and she was better off back in Chicago.  The reader tends to agree.

By this stage of his career, Macdonald has mastered the art of telling a story economically. When Archer and Sable arrive on the estate grounds two women are playing badminton on the front lawn, both of whom will figure into the story.  We get two new characters and a description of the property for the price of our attention to a single page.

Dr. Howell and Archer meet while they are waiting to see Mrs. Galton.  Their conversation is evidence of Kreyling’s conclusion that Macdonald’s selection of the family name was no fluke.  Dr. Howell is steeped in a genetic outlook on life—according to him, Anthony failed to inherit the Galton “characteristics,” by which he means that Anthony was interested in what we would now call social justice rather than running the family business.

Archer gets the following specific information.

While the three are waiting to see Mrs. Galton, the conversation between the doctor and the lawyer takes an odd turn.  It is not clear who is driving the bus.  Presumably the doctor and the lawyer are working together on Mrs. Galton’s behalf, but the doctor expresses puzzlement about why she wants the investigation after all these years. Sable claims to have no idea where the idea came from.  When the doctor speculates that Cassie Hildreth may have planted the idea, Sable offers to find out.